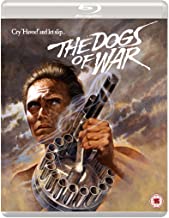 Walken in a War Zone.

British director John Irvin (Raw Deal, Hamburger Hill) takes a story by Frederick Forsyth (The Day of the Jackal, The Fourth Protocol) that he is familiar with. In Irvin‘s early career he filmed in war zones such as Vietnam and had met many mercenaries during the 60’s in various war zones.He uses this knowledge to very good effect in The Dogs of War.

The Dogs of War starts with action, missiles explode all around as a group on a jeep tears through villages with people screaming and fleeing the bombs. On the jeep are Jamie Shannon (Christopher Walken, The Deer Hunter, A View to a Kill), Drew (Tom Berenger, Platoon, Inception), Derek (Paul Freeman, Raiders of the Lost Ark, Hot Fuzz), Michel (Jean-François Stévenin, Mountain Pass), Richard (Harlan Cary Poe, Taxi Driver) and Terry (Ed O’Neill, Wayne’s World), who are headed to the airfield where the last plane out is about to take off.

Back home everybody splits up and we follow Jamie who lives a solitary life in a hotel room until the phone rings, the reception says it’s Endean (Hugh Millais, Chicago Joe and the Showgirl). Jamie doesn’t want to know but shortly after the call there is a knock at the door. Endean wants Jamie to go to Africa, to Zangaro in fact where there was a fight for the presidency and the new President Kimba is not a man to do business with as he is happy to rule his country with an iron fist.

Endean wants Jamie to do a reconnaissance of Zangaro to see if there is any possible way to over throw Kimba and replace him with some one more amenable to Endean’s business backers. So with the cover of an nature magazine photographer he heads to Zangaro.

“He’s content to stay within his borders and slaughter his own.”

Zangaro treats foreigners with distrust, so Jamie has his work cut out trying to keep his cover, even with his fellow journalists and news reporter North (Colin Blakely, A Man for All Seasons, Murder on the Orient Express).

What will all this lead to? You’ll have to watch and see.

“Everybody comes with me, goes home.” 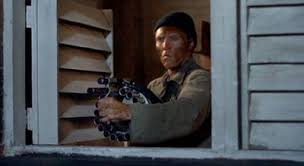 The Dogs of War is available on Blu-ray