4 stars of heartwarming family Christmas in the 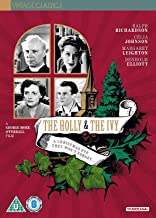 The Holly and the Ivy was originally released in 1952 and is based on the play of the same name written by Wynyard Browne (Hobson’s Choice). It is directed by George More O’Ferrall (The Heart of the Matter) with a screenplay by Anatole de Grunwald (Bond Street).

Just in time for Christmas, the film comes to DVD and Blu-ray courtesy of Studio Canal’s Vintage Classics Collection, fully restored and including new features.

“You probably can’t realise what it’s like to have a parson as a father. If you’re not careful you get involved in a kind of perpetual pretence.” 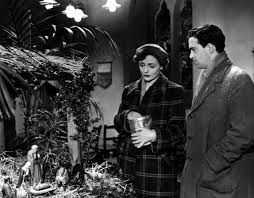 Rev. Martin Gregory (Ralph Richardson – Doctor Zhivago, The Heiress) is a recently widowed parson, living in the sleepy town of Wyndeham, Norfolk with his daughter Jenny (Celia Johnson – Brief Encounter, The Prime of Miss Jean Brody).  As they do every year, invitations are sent out to the widespread family members to join them at the parsonage for Christmas.

This year all the preparations fall to Jenny and she is feeling somewhat trapped. She wishes to marry her fiance David (John Gregson – The Longest Day, The Night of the Generals) and travel with him to South America, but feels obliged to remain at home to see to her father. 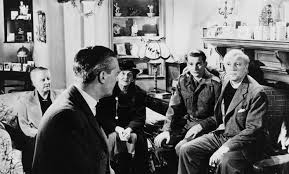 There’s no time to worry about that however as the family start to arrive. First are the two aunts, Aunt Bridget (Maureen Delaney – The Doctor’s Dilemma) and Aunt Lydia (Margaret Halstan – Quiet Wedding), who immediately see through Jenny’s dilemma, much to her consternation. Next is her brother Michael (Denholm Elliott – A Room With a View), who has somehow managed to wangle leave from the army.

Then comes family friend and Godfather to the children, Richard (Hugh Williams – Wuthering Heights) and finally the other daughter Margaret (Margaret Leighton – The Go-Between, The Loved One) from London, who wasn’t planning to come but makes it anyway. 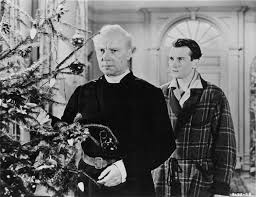 This Christmas Eve will prove to be eventful, as all of the children are struggling with their own personal issues and feel unable to talk to their father due to his religious beliefs. Everything must eventually come to a head.

The Holly and the Ivy is a delightfully festive film, lovely old fashioned carol singing and a great score by Malcolm Arnold (Battle of Britain). Although there are moments of comedy, it soon becomes apparent that this is an extremely well written family drama. 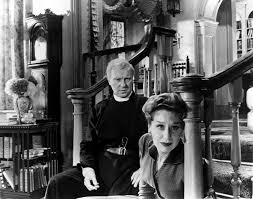 It artfully explores the generation gap, with the younger family members feeling that the older ones are out of touch, as well as taking a candid look at attitudes in a country still recovering from war and on the verge of great social changes, while still retaining that festive feeling.

A lovely film, perfect for snuggling up in front of the fire on Christmas morning.

“Somehow Christmas never seems the same now. As you get older, the magic goes out of things…”

The Holly and the Ivy is available to buy now on DVD and Blu-ray.