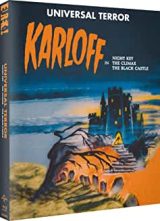 The master of horror returns in this collection of the collaborations with Universal and Boris Karloff (Boris Karloff: The Man Behind The Monster, Karloff at Columbia, The Old Dark House). Three very different style of films, from a man trying to do the right thing, to an obsessed murderous man, to a man seeking the killer of his friends.

he is not the inventor of the security system, that honour goes to inventor David Mallory (Karloff). David is excited as he has invented a new security system that supersedes Ranger’s system, he is about to sign a contract with Ranger so that the new system can be installed and provide

financial stability for his daughter Joan (Jean Rogers, Flash Gordon, Flash Gordon’s Trip to Mars). But once again he is swindled by Stephen. It is payback time and Mallory uses another of his devices and a light-fingered man, Petty Louie (Hobart Cavanaugh, A Letter to Three Wives, Driftwood), to bring the message to Ranger that he has chosen the wrong path.

Vienna Royal theatre, physician Dr. Friedrich Hohner (Karloff) has been in a melancholy mood for the last ten years, due to the disappearance of the prima singer Marcellina (June Vincent, Black Angel, The Creeper). He has been in this mood for ten long years, even the

authorities have given up the search for her. Marcellina was the only one capable of singing ‘The Magic voice’ so it has not been performed since she disappeared. That is until he hears the voice of newcomer Angela Klatt (Susanna Foster, Phantom of the Opera, Hearts in Springtime) and the music of her fiancé Franz Munzer (Turhan Bey, The Mummy’s Tomb, Ali Baba and the Forty Thieves). She has the potential to be the next Marcellina, that voice must be silenced. Dr Huhner has a job to do. This Karloff at his creepiest. (Beware high-pitched singing)

The Black Castle is the home of Count Karl von Bruno (Stephen McNally, Criss Cross, No Way Out). He is of great interest to Sir Ronald Burton (Richard Greene, The Hound of the Baskervilles, Shadow of the Eagle), who has gone to the trouble of changing his name to Richard Beckett thanks to the help of Sir David Layton (Leslie Denison, The Fighting O’Flynn, Rogue’s March) who is the English minister at the court of Emperor 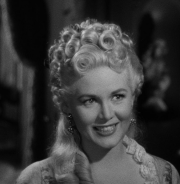 Charles VI. Beckett believes that Bruno has murdered his two friends in revenge for having him run out of Africa by the natives. Beckett has been invited to the Black Castle to enjoy the hunt in the Count’s estate, with his man-servant Romley (Tudor Owen, When in Rome, Back to God’s Country) they head to the Black Forest, but they will stop off at the last place that his friends visited, The Green Man inn. 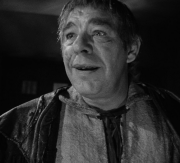 These two men start a cat and mouse game as both know something is not right, could Bruno’s doctor Meissen (Karloff) offer a clue? What Beckett has to do is avoid Gargon (Lon Chaney Jr., The Wolf Man, The Mummy’s Tomb) Bruno’s brute of a man. But what Beckett wants is to get his hands on apart from the murderer of his friends in Countess Elga von Bruno (Rita Corday, The Exile, Dick Tracy vs. Cueball) the neglected low-born wife that was under contract to marry the Count. 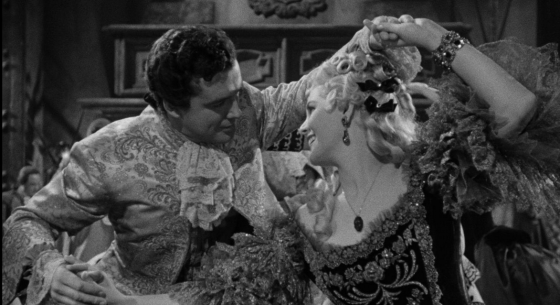