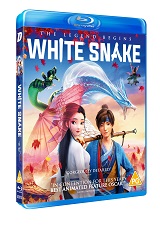 White Snake is a computer animation fantasy film and impressive directorial debut for both Amp Wong and Ji Zhao, with animation production by Light Chaser Animation (Cats and Peachtopia). It is written by first time writer Da Mau.

It is inspired by the Chinese folktale Legend of the White Snake.

“Can’t you see, sun above? Sets behind the hills, rises as it wills. No concern as it gleams, this life floats by, it’s a dream.” 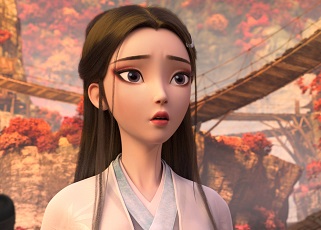 As the film opens, we see two sisters in a Chinese bath, where they speak of immortality. 500 years previously we see one of the sisters, Blanca (Stephanie Sheh – Boruto: Naruto Next Generations) on a secret mission to assassinate an evil general. Unfortunately she is caught and in the resulting battle loses her memories. 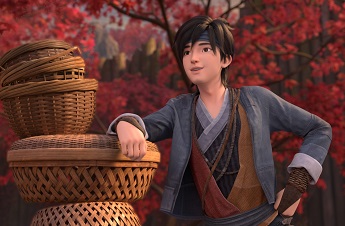 Sean (Paul Yen – Animal Kingdom) is a young snake catcher living in the snake catcher village who has a slight problem, he’s afraid of snakes! While out foraging one day, he finds a young woman unconscious in the water next to his hut.  It is of course Blanca and the two set about trying to find out who she really is. It turns out she has magical powers, she makes Sean’s dog Dudou (Matthew Moy – No Strings Attached) able to talk, much to his consternation. 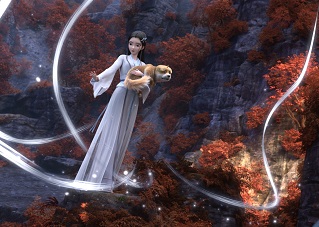 As their bond strengthens, she begins to realise that she is in fact a snake demon, able to transform into a huge white snake. Sean is willing to put that aside and help her as he has feelings for her, but her own people feel betrayed by her friendship with a snake catcher. Her sister Verta (Vivian Lu – Nowhere Man) is especially angry with her.

Can they prevail against the general and find a way to be together against all the odds?

White Snake is truly breathtaking to look at, the animation is stunning and any given scene could be used as wallpaper. The story is a traditional boy meets girl, good versus evil scenario which is quite dramatic and heartwarming and perfect for its intended audience.

Parents should be aware that this is based on Chinese folklore and as such has some dark violence and themes, but is still an excellent watch for the whole family with plenty for adults to enjoy too.

A real feast for the eyes and well worth adding to your collection.

“The world’s getting worse and worse and taxes just keep getting higher. The general lets us pay them off with snakes, which means no forced labour – we all decided to catch snakes.”