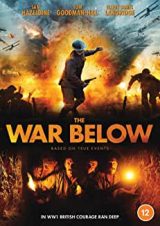 First time writer/director J.P. Watts takes us back to the time of the Great War, World War I, when things are at a stalemate in France at the Somme. Britain needs more men, and they say We Need You!  Men turn out in their thousands to volunteer to go to the frontline. One of those men is miner William Hawkins (Sam Hazeldine, Peaky Blinders (TV Series), The Hitman’s Bodyguard) who is rejected due to his long time spent underground. This is the story of how he played a major role in World War I.

Bloodshed that should have been over by Christmas. Still has no end in sight. Throughout Britain, able-bodied men sign-up to bolster the ranks. To do their duty.

Those who refuse get a white feather, labelled as cowards and traitors.

William Hawkins stands in the queue like hundreds of others, waiting patiently for the doors to open, so they can pass their medical physical examination, but not for the first time he is turned away by the doctor because of his years underground breathing in sharp dust. He has to go back to his job as others swear their allegiance to the King.

1916 the Somme and one of the young boys who were sworn in is now a communications runner. He runs through the packed trenches to get to the corporal with the phone, he carries grave news, position 299 has not been taken and the infantry has failed again to break through German lines. Stalemate.

Back in Britain, the top brass cannot believe the figures of 40,000 casualties in just seven days, with over 1.5 million shells being fired at the Germans that are deeply entrenched on a ridge overlooking the Somme in Messines. The Germans are thirty to forty feet underground where the shell won’t touch them, and when our lads go over-the-top the Germans pop up and cut them down.

Hellfire Jack (Tom Goodman-Hill, The Imitation Game, Chalet Girl) informs him of the German position and the stalemate, which doesn’t go down well with Colonel Fielding (Andrew Scarborough, Emmerdale (TV Series), Downton Abbey (TV Series)) the head of the infantry.

Do you have a different approach? Yes, sir, I believe I do.

His proposal is to tunnel all the way across no-mans-land and blow up enemy machine gun positions. Preposterous is the reply, but Jack is a persuasive man, and he is given the go ahead. The plan is to use miners to train a platoon, and they will do the job. How long do we have? Four months, one to train the men, three to get the job done. No chance. We should go and do the job.

There is lots of objections, but the miners are off to the front line.

You wouldn’t do this at home… We aren’t at home.

Leading the bunch of lads is William Hawkins with Shorty (Joseph Steyne, Return of the Don, Crossing That Bridge), Harold (Kris Hitchen, Sorry We Missed You, The Letter for the King (TV Series)), brothers George (Elliot James Langridge, Killers Anonymous, Beautiful Devils), and Charlie (Sam Clemmett, Cherry, Holby City (TV Series)). This is their story of Duty, Honour and Skill.

The War Below is a tense and gripping tale, as the Germans get to know of their skills and what they may do next.

The War Below is available on Digital from the 10th September.

RELEASED IN THE UK AND IRELAND ON 10TH SEPTEMBER 2021