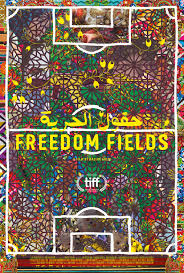 Naziha Arebi directs and films this five year long project about Libya’s first female football team in post revolution Libya. (2011). This her first full feature length documentary delves deeply into the hearts of her film subjects and those around them that should help but only seem to hinder the mothers of Revolution.

“Sometimes we are blessed with being able to choose the time and the arena, and the manner of our revolution, but more usually we must do battle where we are standing.”

Starting one year after the revolution, but in a time when there are still bullets flying and power cuts are a regular occurrence for every citizen. But 35 young women have a dream to play in their national team and represent Libya in the 2011 FIFA Women’s World Cup held in Germany.

Excited, nervous and inexperienced due to the football federation being controlled by men and religion. With religious leaders saying they will have their legs on show for weeks and how that is an outrage and the fact that the 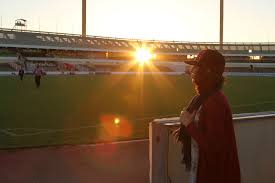 tournament will take place during Ramadan. Women should be born, live, marry and have children.

This film shows the Ambition versus the Status Quo when the dreams of Germany disappear, the ridicule that they suffer and how they move onto another year without playing on their field of dreams.

A year on and some have married some are studying, but not playing football. The dream is still there but the support isn’t.

“Whoever sees evil, he must change it with his hands.”

“If he can’t, then he must change it with his words.” 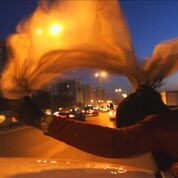 With bullets flying and not fireworks, Arebi gets into the houses and families of our team and the fears they have as Gaddafi’s men try to reclaim the revolution and the team is disbanded due to security fears during Ramadan.

The conflict the women have as the male Libyan national team has victory over Zimbabwe and there is dancing in the streets and they are called hero’s while their team is shunned.

But their spirit is not broken. Not even when those that are there to support and train them turn against them.

Freedom Fields is an amazing insight into the struggles a dream has to endure to see itself to fruition. A must see for anyone who has a dream and is  struggling to see the light at the end of the tunnel. Awesome! 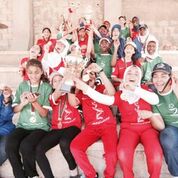 Check out the screenings here

Freedom Fields is in Cinemas from 31st of May 2019

Director Naziha Arebi says about her film, “Initially I thought I was making a film about the women’s fight to play their first ever match as Libya’s national women’s football team but it became something far richer, more intimate and more powerful. I started to question how far we go before we realise a dream is over, I also discovered the power we find in such moments to start to create new dreams. This revealed itself as the core essence of the film, for the team, and for myself. The human ability to re-invent, to find strength, spirit, even when we feel we have lost everything.  FREEDOM FIELDS is a testament to taking action, finding strength in the face of adversity, and sharing that will, power and joy with others and the next generation.”