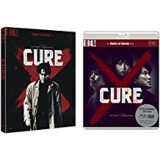 Eureka bring us the multi award winning film Cure as #181 in their The Masters of Cinema range. They make this the first time to own this psychologically  disturbing film as we delve into the mysteries of a serial killer. Writer/director Kiyoshi Kurosawa (Journey to the Shore, Creepy) knows how to get into your head and keeps you on the edge of your seat as we watch our detective start to fray at the edges.

It all starts out innocuously as a man walks home from work, he pauses in an underpass and we see a pipe moving. Then we are in a dark room with the man and a a naked woman, then bang, we find out what was happening to the pipe earlier. Claret 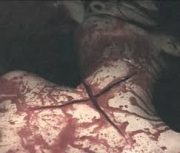 everywhere (a theme for this film) when the police turn up, a dead prostitute in a bed may not be a rare thing but what had been done to her after the pipe was. She had been cut from throat to chest in a big X.

It has fallen to Detective Kenichi Takabe (Kôji Yakusho, The Boy and the Beast, 13 Assasssins) to find who is responsible for these heinous crimes, for this is the 4th in two months and they all have the same MO, but they have all been committed by different people who remember nothing about it or why they did it.

There has been no media coverage of the details of the deaths or any leaks from the department. So how are these murders continuing?

Clearly confused, the man takes him back to his house where his demeanour remains the same, a tag is found in the strangers coat with the name Mamiya (Masato Hagiwara, Happy Island) in it, but the man still has no recollection of it but does tear it

off the coat. He stays that way  until he starts asking about him and he is Tôru Hanaoka (Masahiro Toda, Paranoia) a teacher at a local school and his wife is upstairs with a cold.

Takabe has his own troubles at home, his wife Fumie (Anna Nakagawa, See You at the Campground) has psychological problems, she gets lost a lot and every time he comes home the tumble-dryer is always on and empty. This frustrates Takabe but he deals with it.

The next day there is another X murder at a coastal house where a teacher has killed his wife and he remembers all the gory details but not why.

Takabe brings in psychologist Makoto Sakuma (Tsuyoshi Ujiki, The 8-Tomb Village) to help him with the case and this is where things start to get really interesting. That is where I shall leave you.

No one is immune to this killer!

Gripping and disturbing, superbly cast and shot, a must watch.

The Question is “Who are You?” 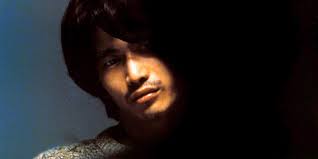 Cure is available on Dual-Format.