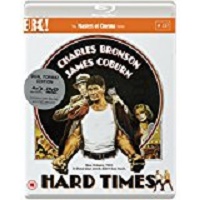 From a time when Charles Bronson (Death Wish Series) would rule the silver screen as a star in his own right. Eureka’s Masters of Cinema Series #157 Dual-Format release brings it up to date with all it’s special features. Director/producer and writer’s first film, a brilliant start to a career that went from strength to strength, Walter Hill (The Driver, The Warriors, The Long Riders, 48 Hours, Brewster’s Millions).

1930’s America and it is the great depression and people will do anything to earn a crust. A man, ‘Chaney’ (Bronson) rides a train in from somewhere and gets off when it slows down. 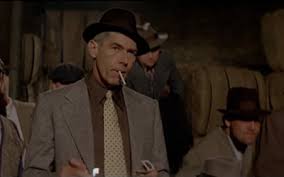 He sits drinking coffee at a street vendor when he spots cars pulling up to a warehouse and a load of people disappearing inside. Intrigued he follows them. There is a commotion as he discovers an illegal bare-knuckle fight. run by the fast talking Speed (James Coburn, Our Man Flint, The Great Escape). Chaney watches intently from the background, he sees Speed’s fighter get pummelled, ‘easy come easy go. ‘

for him and points out that he doesn’t have a fighter at the moment and he has six dollars in his pocket. Speed agrees and sets up the fight with the same opponent that Speed just lost to. His opponent takes the mickey out of Chaney, taunting him about his age, but Chaney just bets his six dollars and strips down to his vest. He looks tough enough to me.

They square up to each other and begin, Bam! Chaney’s opponent is on the floor sparked out. Speed is suitably impressed and offers to be his manager. Chaney tells Speed that he is only in it for the money and when he has enough

to “fill a few in-betweens” he is off.

The pair head for Speeds home town of New Orleans to set up fights at long odds. They are met by Speed’s fiancée Gayleen Schoonover (Margaret Blye, The Italian Job, The Entity).

Chaney goes off to find a place to stay and when he goes to a diner he meets a non-talkative girl Lucy (Jill Ireland, Death Wish II, The Mechanic).

He eventually gets to walk her home where she informs him that she is married, but her husband is in prison at the moment. They start an uneasy relationship.

What Speed wants is to take down an old rival, Gandil (Michael McGuire, Beyond Death’s Door) and his number one fighter Jim Henry (Robert Tessier, The Deep), they watch one of his fights and that man has a hard head. They set about getting the big prize fight, but first they need a cuts man and the opium loving Poe (Strother Martin, Cool Hand Luke, The Wild Bunch) is the right man for the Job.

A classic Bronson film from when he was in his Heyday and with Eureka’s special treatment you get plenty for your purchase, a great addition to your classic film collection or a great start to a Charles Bronson Collection.