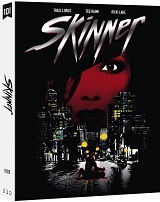 Skinner is written by Paul Hart-Wilden (Alone, Wolf Town) and directed by Ivan Nagy (Deadly Nightmares, Playing With Fire). It was originally released in 1993 and is presented here on Dual Format DVD and Blu-ray, following a 4K restoration courtesy of 101 Films Black Label.

Dennis Skinner (Ted Raimi – Deadwax, Angel of Death) is a very presentable and polite young man. He seems to be a drifter, moving from place to place with nothing but his trusty bag of tools for company. 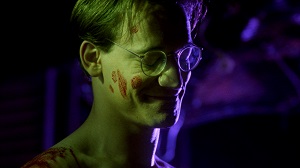 Moving to a new town, he finds himself a room to rent in the home of Kerry (Ricki Lake – Hairspray, Serial Mom) and Geoff Tate (David Warshofsky – Now You See Me 1 & 2, The Master). Geoff isn’t overly happy about the situation, as he is a long distance driver and away from home for weeks at a time. Jealous and hating the idea of another man living under the same roof as his wife, he is short with Kerry and downright mean to Dennis.

Unfortunately for all concerned, Dennis has a hobby quite appropriate to his name. He likes to roam the streets at night looking for hookers, toting his bag of “tools”. 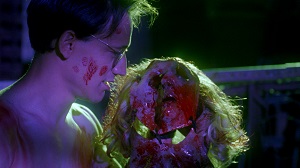 When he finds them he likes to peel of their skin to create full body suits and then prance around wearing them and impersonating the previous owner. Not the sort of person you want as a lodger.

Hot on his heels is previous victim and badly disfigured survivor Heidi (Traci Lords – Blade, Excision) armed with lots of drugs and a big old grudge. Can she stop Dennis before he tries to act on his feelings for Kerry? 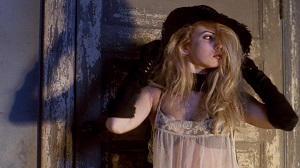 Skinner is a surprisingly good film. It features a mixed bag of acting performances, Ted Raimi is absolutely brilliant and Traci Lords is terrible – pouty, ridiculous and sporting a comedy limp. The effects are really good, extremely graphic and leaving nothing to the imagination. No punches are pulled with the story either, the scene where he dons the skin of a black man and prances around throwing out racist jokes is quite shocking.

The whole feel of the film is unsettling, with it’s moody settings and over the top lighting. Previously regarded as a lost film, it’s now firmly back in the spotlight thanks to this excellent package and well worth adding to your collection.

A Touch of Scandal – Interview with Director Ivan Nagy

Under His Skin – Interview with Star Ted Raimi

“I told you not to look while I was getting dressed. We’re gonna have a talk, you b***h!” 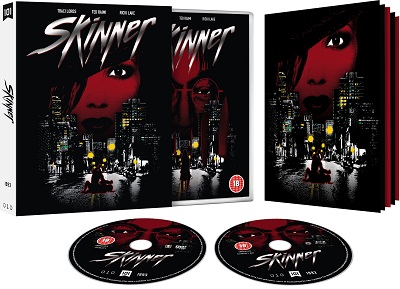 Skinner is available to buy now on Dual Format DVD and Blu-ray and will be released on 14th Oct 2019.