The White Reindeer is written by Mirjami Kuosmanen (Kihlaus, Kun on Tunteet) and Erik Blomberg (Wedding Night). It was originally released in 1952 and is presented here following a 4K restoration, in the original Finnish with optional English subtitles. It is part of the Masters of Cinema Series #203.

“You must sacrifice to the Stone God the first living thing you meet on the way home. Then no reindeer hunter will be able to resist you.” 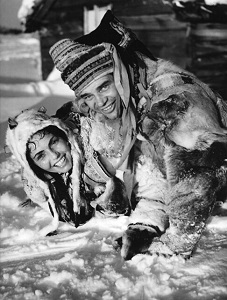 It tells us the story of Pirita (Mirjami Kuosmanen), a beautiful young girl and a member of a village of reindeer herders living in Finnish Lapland. After a short courtship, her prospective husband Aslak (Kalervo Nissilä – Open Secret) plucks up the courage to ask for her hand in marriage and in no time the two are wed.

At first all is happy, but soon Aslak’s devotion to his work becomes a problem as he is away with the herd for long periods of time. He leaves her a young white reindeer fawn to keep as a pet, but this doesn’t satisfy her need for companionship. Sexually frustrated and lonely, Pirita turns to the local shaman Tsalkku-Nilla (Arvo Lehesmaa – Here, Beneath the North Star) to help her out. 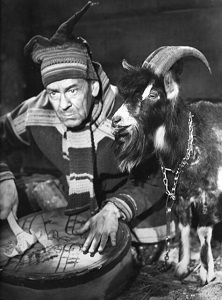 He performs a ritual to make her irresistible to reindeer hunters, with one condition, she must kill the first living thing she sees on the way home in order to seal the deal. Unfortunately, the first thing she sees is her beautiful reindeer, which she duly sacrifices.

The ritual is a success, however there is a terrible price to pay. She is transformed into a bloodthirsty shape-shifting white reindeer, who craves the taste of male blood.

The White Reindeer is certainly a haunting tale, which opens with a nerve shredding rendition of a Finnish folk song, laying the foundations of the story. The desolate and icy snowscapes are very oppressive, the scenery striking and with it’s dramatic and almost continuous score the soundtrack is almost a character in it’s own right. 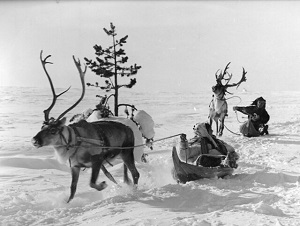 There is very little dialogue and little is needed, the visuals speak for themselves, telling a folk tale of gender inequality and female sexual appetites which was well ahead of its time. It has an almost dreamlike quality to it, which serves to emphasize the horror aspects even further. Based on Lapland mythology, this is a film which deserves to be seen and with it’s included book and limited edition slipcase, this release is well worth adding to your collection.

“A reindeer is fast, but a wolf is faster.”

The White Reindeer is available to buy now on Dual-Format DVD and Blu-ray and will be released on 08th April 2019.