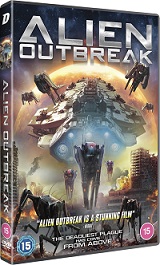 For what was obviously a low budget affair, this is a very effective film which makes the most of the available resources.

“It’s trying to get in the house. It’s come back for me. It wants me.”

Sgt Zoe Norris (Katherine Drake – Call Me Church) is a Canadian police officer who has moved to England to be closer to her in-laws and taken a job in a sleepy rural community. Along with her fellow policeman Patrick (Ritchie Crane  – The Legend of Mordred) she starts out what seems to be a run of the mill shift.

They begin to notice problems with their comms, as a call comes in to attend a suicide at a nearby farm. Mrs Peters (Peggy Salmon – Wycliffe), the wife of the victim can’t understand it, her husband seemed quite happy when he returned from the pub. It’s only minutes later that she turns the shotgun on herself.

Zoe and Patrick place a call requesting an ARV (Armoured Response Vehicle) from the city and on the way back to the station Zoe encounters yet another body. Upon investigating, she finds a strange alien robot in the nearby house, seemingly attacking people. Patrick has become trapped in the local tavern with more of the creatures there. 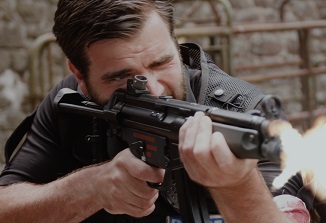 With members of the community turning aggressive, paranoid or suicidal, Zoe and Patrick must try and work out what is happening. Helped by local farmer Dale (Michael Terry – All in the Valley) and doctor Mitchell (Philip Alexander Baker – Killing Lionel), they attempt to unravel the mystery of what these sinister visitors want from them. 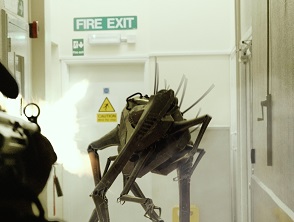 Alien Outbreak is a good Indie sci-fi horror. The aliens are beautifully done and genuinely scary and there is plenty of graphic gore (more than you would expect given it’s 15 certificate). There is also lots of fruity language, this one is not for the faint hearted.

Although some of the characters decision making is questionable and the acting isn’t always the best, it’s a good story with an interesting twist and backed up with an excellent brooding soundtrack which compliments the atmospheric settings.

A really good Independent film with a cast of relative unknowns and well worth a watch.

“Oh Dale, I don’t think they came all this way for a bit of your hay and British beef.”

Alien Outbreak is available to buy now on Digital and DVD.