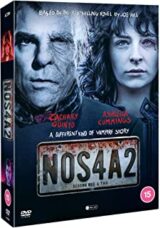 A Biker Chick, A Witch and a Wraith.

From the writer that brought us the dark family story of Locke and Key, Joe Hill (pen name) brings us a modern day vampire story, where a supernatural car helps keep its owner alive to do his life given quest. And the girls that must put a stop to his dastardly deeds.

In Here Iowa USA a young Danny Moore (Asher Miles Fallica, Greener Grass) can’t sleep, and he feels lonely, he can hear his mother entertaining her man. He goes and asks his mother Karen (Megan McQuillan, A Late Quartet) if he can sleep with her. But Karen is preoccupied with her man and refuses his request.

I feel like the loneliest boy in the World.

Danny retreats downstairs to his trusty cartoons on TV, until the cartoons turn to snow interference  and the faint sounds of Christmas songs. Danny goes to the door where he finds a candy cane, and a posh old car with a door open and enticing goodies within. Meanwhile, inside Danny’s house there is an intruder, Mr Ives (Michael Maize, Kiss Me, Kill Me) who dispatches Karen’s lover with a fatal injection, and when Karen notices that Danny is missing Ives just

manages to get a partial dose into her so he must finish her off manually which young Danny witnesses. Which does not sit well with the elderly driver (Zachary Quinto, Superman: Man of Tomorrow, Snowden, Star Trek, Star Trek Into the Darkness, Star Trek Beyond) of the 1938 Rolls-Royce Wraith.

Hello my name is Charlie Manx, just wait till we get to Christmasland.

It’s not clear how good you are. 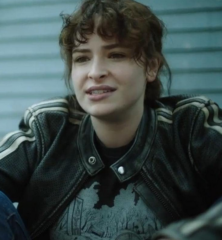 An eighteen-year-old Vic McQueen (Ashleigh Cummings, Miss Fisher and the Crypt of Tears, Tomorrow, When the War Began, Gallipoli (TV Mini-Series)) is helping her mother Linda (Virginia Kull, Curveball) with her job of cleaning the houses of the wealthy in Haverhill, and today they are at Vic’s friends Willa (Paulina Singer, Stella’s Last Weekend) who is asking the big question, what college are you hoping to get into? Vic has aspirations to be an artist, an ambition that her mother deters at every turn, due to cost, and the fact that she doesn’t want to

be left alone with her husband Chris (Ebon Moss-Bachrach, Tesla). If domestic violence upsets you, not shown but heavily implied, maybe this is not the series for you. He has a drink problem as well as other vices, but he does encourage Vic’s talents and gives his sage advice.

Never get married, and never ever ever… Ever have any kids! 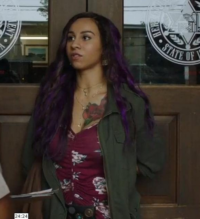 Back in Here the police have been alerted to Danny’s abduction and the death of his mother and her partner, and the young Maggie (Jahkara Smith, Into the Dark (TV Series)) is pestering police Sheriff Bly (Chris McKinney, Monsters and Men) about the disappearance of Danny. S  he wants to help find him using her special talent of reading her bag of scrabble tiles, which has helped the police of Here before. But Bly is reluctant to use things beyond his or the rest of society’s comprehension. Determined to discover Danny’s whereabouts she uses her tiles to ask where Danny is and the answer is ‘The Wraith’ but how do you find a wraith? The answer is ‘The Brat’.

The Brat is Vic and with her dirt bike she finds an old derelict bridge during one of her outings while her parents are shouting at each other. The bridge has some creepy vibes coming from it, but Vic is drawn to it especially when she finds that it leads her where she needs to be, to find lost items when she thinks about them. No one else can see the bridge as it was torn down when she was a young girl. This is her special bridge, named the Shorter Way.

With this box-set you get fifteen hours of pure horror and creepiness as Charlie Manx takes his victims to his Christmasland and the problem of how to feed so many children. Vic and Maggie chase the Wraith across the country trying to bring about Manx’s demise. Both have allies, but Manx’s are far more deadly even if you think they are your friend, eh Bing (Ólafur Darri Ólafsson, The Dark Crystal: Age of Resistance (TV Series)). 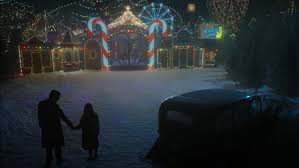 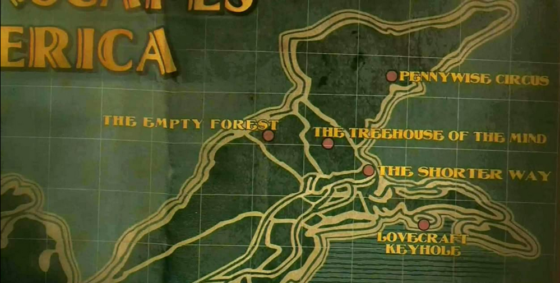 NOS4A2 is available on DVD