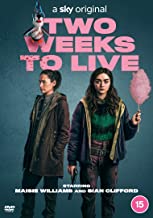 A True Voyage of Deadly Discovery.

From the pen of Gaby Hull (Benidorm (TV Series), We Hunt Together (TV Series)) comes a British Black Comedy that only British writers can produce (Hilarious). Brought to life by Sky UK and HBO Max with Al Campbell (Code 404 (TV Series), Man Down (TV Series), Fit (TV Series)) at the helm we get six episodes of laugh out loud comedy with those peering through the fingers ‘ouch!’ moments.

Picture a naive young woman in the North of England (Maisie Williams, Game of Thrones (TV Series), Departures, The New Mutants, Departures, Early Man), her SUV and a cafe…Carl’s Cafe, and Carl (Tony Pritchard, RED 2, Burnt) isn’t one to miss an opportunity when he sees this young woman with her wide eyes and shed loads of cash. He charges her £10 for her food, car parking and using the toilet which doesn’t go unnoticed by the patrons and his wife Mandy (Pooky Quesnel, Great Expectations, Oh Happy Day).

You can put lipstick on a pig Mand…It’s still a pig.

In the bathroom our stranger asks Mandy about her relationship with Carl and finds out that she married him, when she tries to buy Mandy’s make-up she gives them to her and tells her of the theft her husband has committed against her. Her retribution is swift and painful.

It’s OK Mandy, I’ve had enough pig for one day.

The South Coast and our girl has found the pub where her mother and father had their first date, and never having been in a pub she wants this first time to be

special, so she dresses up for the occasion. Inside the pub are brothers Jay (Taheen Modak, Five Dates) and Nicky (Mawaan Rizwan, Carnage, The Nightman of Nevermoor) who has just been dumped by his girlfriend and Jay is here to sort his brother out, even if his thinking isn’t quite up to the job.

OK, you have to speak to next woman that walks into this bar, whoever they are.

Meanwhile, in off the beaten track Scotland, a tranquil scene of a woman doing a watercolour, she is  Tina Noakes (Sian Clifford, A Serial Killer’s Guide to Life, Fleabag (TV Series)), the mother of our runaway Kim Noakes.

Back at the pub Jay, Nicky and Kim talk about the end of the World as you do and whether you would prefer to be off grid or in the thick of it? This conversation continues back at the lads house where Jay thinks of a practical joke to play on their new survivalist friend, as Nicky and Kim

talk about how both their fathers died. Kim was definitely more vivid and visceral as she witnessed the whole thing and the man responsible, one Jimmy Davies (Sean Pertwee, Event Horizon, The 51st State), who got off scott free.

Sex, Doughnuts and the end of the World, baby.

This one practical joke sets in motion a train of events that no one was expecting, especially Jimmy and detectives Brooks (Jason Flemyng, Lock, Stock and Two Smoking Barrels, Snatch, Transporter 2) and Thompson (Thalissa Teixeira, Fast & Furious: Hobbs & Shaw, Take Down).

Two weeks to Live is a great mini-series to get your black heart pumping its last quart of blood out before your very eyes. Superb!

Two Weeks to Live is available on DVD and Amazon Prime