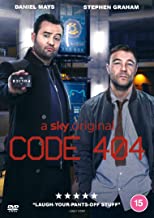 Never be the Beta Tester.

From creators Tom Miller, Sam Myer and Daniel Peak (Two Pints of Lager and a Packet of Crisps (TV Series), Not Going Out (TV Series)) comes a quintessentially British comedy where you see the jokes coming a mile away, and they are cringe worthy, but you still laugh. At half an hour an episode they do not grate on the senses too much. Is this a comedy insight to the future of our police forces?

Top detective DI John Major (Daniel Mays, Welcome to the Punch, Rogue One, The Adventures of Tintin: The Secret of the Unicorn, 1917) is on a sting mission to catch the kingpin of a gun smuggling ring. He is backed up by his partner DI Roy Carver (Stephen Graham, Snatch, This Is England, Pirates of the Caribbean: On Stranger Tides, Tinker Tailor Soldier Spy) who is keeping tabs on Major from the safety of the surveillance van.

Major is faced by arms dealer Kristof (Richard Pepple, Beasts of No Nation) and small-time drug dealer Liam Cleasby (Richard Gadd, Clique (TV Series)) who is sat in the SUV.

Earlier that night at Major’s house he had had an argument with is wife Kelly (Anna Maxwell-Martin, Becoming Jane, Alan Partridge: Alpha Papa) and there is something niggling him about Roy.

Major thinks the deal is going well until Kristof fingers him and Roy fails to notice a red Jeep heading to Major’s location. With the smallest of times to react he tries to get the name of the kingpin from Kristof as the Jeep pulls up and a guy fires an automatic rifle at Major who is hit multiple times and everything Roy tries after the Jeep speeds off as well as Kristof and Cleasby is all in vain as Major succumbs to his injuries.

London’s best cop gets a full honours funeral and an area dedicated to Major. A year later Roy is paying a visit to the (birdbath) memorial to remember his partner and have a h

Roy sees a ghost before him, but no, it is John Major alive and well-ish.

He’s a work in progress.

After his death his superior DCS Dennett (Rosie Cavaliero, Mid Morning Matters with Alan Partridge (TV Series), A Young Doctor’s Notebook & Other Stories (TV Series)) collaborated with American scientist Dr. Alison Parfit (Amanda Payton, CSI: Cyber (TV Series) Miss Me This Christmas) to fit him with an A.I. and bring him back to life better than ever, or, so they hoped.

John Major is an idiot and it is Roy that has to suffer all of John’s muck-ups and take the fall (literally) for John’s mistakes.

No. You are forgetting that narcotics no longer affect me…You sure?

Can Parfit get John up and running and stop Helen Chalmers (Tracy Ann Oberman, EastEnders (TV Series), Doctor Who (TV Series)) and her ethics committee turning off John?

With gags coming at you hard and fast, it is hard not to laugh at this pair of fine actors and those around them.

Code 404 is available on DVD