4 stars for this tense but sometimes slightly vague thriller. 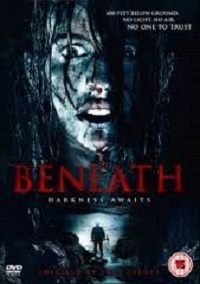 Beneath is written by Patrick Doody and Chris Valenziano (Bugs, Call Of Duty: World at War) and directed by Ben Ketai (30 Days of Night: Dust to Dust).

“The following is inspired by true events. In 2013, a collapse at the Brackett Coal Mine left a group of workers trapped nearly 600 ft underground. This is what happened beneath the surface.”

Samantha Marsh (Kelly Noonan – Haunt, Road To Paloma), an environmental lawyer from New York, is back in her hometown to help her father George (Jeff Fahey – Machete, The Lawnmower Man) to celebrate his upcoming retirement. 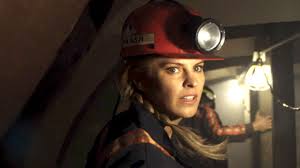 At his leaving party, she is challenged on her choice of career, given that she was raised in a mining community, which basically funded her anti-mining training and job. By way of reply, she agrees that she will join her father and the other miners for his final shift, to see how it is they live and work and understand what exactly the job is all about. 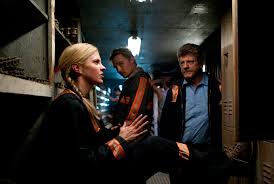 The next morning, Sam and the rest of the crew make the long descent into the depths of the mine. Along for the ride are her father, childhood friend Randy (Joey Kern – Lucky You, Cabin Fever) who is charged with her safekeeping, Bob (Brent Briscoe – The Dark Knight Rises, The Green Mile) an old friend and father figure to the group, Masek (Eric Etebari – The Lincoln Lawyer, 2 Fast 2 Furious)and Grubbs (Mark L. Young– We’re The Millers) and the rest of the crew.

It’s not long however before things begin to go wrong, when the munching machine hits a rough spot and breaks through into a cavern, at the same time triggering a catastrophic cave in, which leaves our heroes trapped. 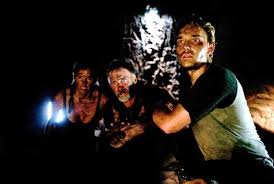 No need to worry though, there’s a survival pod which contains plenty of food water and oxygen to last them the 3 days until help can arrive. But it soon becomes apparent that this may be a fight for survival after all, as one by one they begin to succomb to madness and turn on each other.

Beneath is pretty well written and the acting is superb. The feel of the whole piece is extremely claustrophobic and this is probably best not watched by people with a fear of being buried alive. 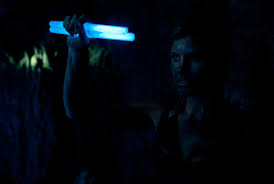 I have two slight complaints about this film.  One: it is rather vague when it comes to certain storyline elements, which is more frustrating than tension building and two: some parts of it are so dark that you are completely unable to see what’s going on (not the ones which are pitch black, they’re designed to be that way) but in some scenes although you can see that something is happening, in the dark and with everyone covered in coal dust  you can’t tell who is who.

Complaints aside, overall it works very well and is a really enjoyable watch and a good story, disturbingly based on real events and well worth adding to your DVD collection.

“We got food and water. Ain’t nothing fancy but it’s our home for the next three days”.

Beneath is available to buy now on DVD.