4 stars for this excellent and very scary psychological horror. 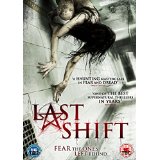 Last Shift is written and directed by Anthony DiBlasi (Dread, Cassadaga) and is a master class in building tension and fear.

It tells the story of rookie cop Jess Loren (Juliana Harkavy – If You Only Knew, The Walking Dead) who has arrived for her first shift. She has joined the force to follow in the footsteps of her father, who was killed during a raid on the Paymon Ranch exactly one year before. 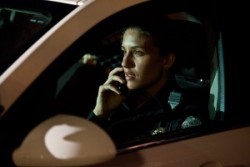 After a less than warm welcome from her superior Sergeant Cohen (Hank Stone – The Punisher, Cold Mountain), she is told that she is here to wait for the hazmat team to remove the contents of the evidence room and man the desk in case of any walk-ins. The station is to be closed down at the end of her shift. 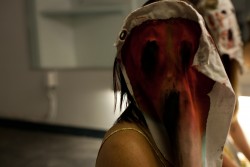 Everything seems to be fine at first, however there are several things which seem odd. Lights flicker, doors open and close and a vagrant, the magnificently named Panty Belt Patrick Black (J. LaRose – Insidious: Chapter 2, Now You See Me), walks into the station and relieves himself all over the lobby, resulting in his arrest and incarceration in the holding cells, which Loren has been warned not to enter.

She also begins to receive phone calls from a girl called Monica, claiming she has been kidnapped and kept at a ranch, even though all calls to the station should have been re-routed to the new operational unit.

Outside the station, she meets Marigold (Natalie Victoria – Chemical Peel), a prostitute who tells her the story of her night in the cell next to John Michael Paymon (Joshua Mikel – We’re The Millers, Heist) and two of his followers, Dorothea (Kathryn Kilger – Two Days) and Kitty (Sarah Sculco – Vicarious). Loren had always believed they had died at the scene of her father’s death but finds out they were in fact found hanged in their cell at the police station. 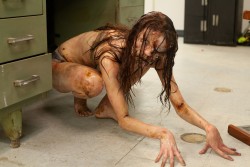 The legacy of that night is now awakening one year on, and she is left in the station to face the demons of The King of Hell alone and attempt to survive her first ever night on the job.

Last Shift is a truly frightening film, with lots of gruesome and effective special effects and plenty of jump scares. The sound effects are also very good and make you nervous and more than ready for the highly surprising twist at the end.

The acting performances are superb and as a whole this really works. An excellent example of it’s kind, totally lacking in the usual clichés and would grace the collection of any fan of the horror genre.

“Dead People are always so messy. There’s so much blood splashing around in there. Make a couple of holes and it just pours out.” 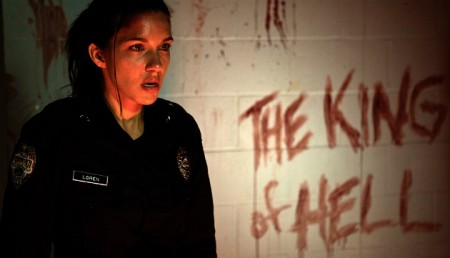 Last Shift is available to buy now on DVD and digital.