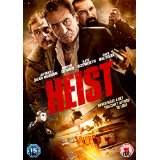 Stephen Cyrus Sepher (One More Round) writes and stars in this Scott Mann (The Tournament) film of conscience, money and a little girl’s life. A bit different from your normal Heist film and for the better may I say.

Imagine three people in masks running down a road, fleeing the hail of bullets being fired at them, as they pull in front of a bus and get on board. A week earlier…

The Swan Casino is well established and has been run by The Pope (Robert De Niro, Silver Linings Playbook) for many years and now it is coming his time to retire. He is a well respected man who lives by defined principles and woe-betide if you break or cross one of those principles.

Long term employee Vaughn (Jeffrey Dean Morgan, Red Dawn) has worked hard for years and could have been running the casino floor by now but walked away from that and now just works the blackjack tables showing off his card tricks.

But Vaughn has a dilemma, how to raise the money for the surgery his young daughter needs. He is already spending his wages on her medical expenses, so

he goes to the Pope and asks for $300,000 to pay for the surgery but Pope points out the principles and refuses to lend him the cash and Vaughn points out all the favours and blind cheeks he has turned over the years to the dodgy dealings going on in the casino, which earns him cuts and bruises and the loss of his job. This is when Vaughn takes the offer made by Cox (Dave Bautista,

Guardians of the Galaxy), who has noticed the goings on on the casino floor and that on a Thursday night there is a shed load of money waiting to go missing. They bring in Mickey (Tyson Sullivan, Demonic) and Dante (Stephen Cyrus Sepher, One More Round), Mickey as the driver and Dante as back up.

The Heist is the first part of the story, the main body of the film is after the heist gets rumbled and they all have to leg it after Mickey skips the scene, the first

thing they come across is bus 657 which they promptly take over. They are now pursued by the police and Popes main man.

Vaughn is the calm one and only wants to get his cut of the money to the hospital to pay for the surgery but Cox is up for killing the hostages to get his way with Dante to back him up. How will it all pan out?

A great film with a twist.