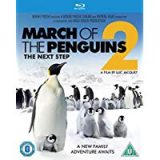 “It’s pick up time at preschool, but unfortunately the entire class consists of nearly identical twins, all wearing the same outfit.”

Luc Jacquet has returned to the scene of his first film, the Antarctic, to film another family of majestic Emperor Penguins. 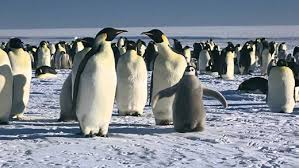 This time he focuses primarily on the relationship between father and son, as we see a first time father learning the ropes in what is arguably a life and death situation for all concerned.

All the perils of raising children in such a harsh environment are beautifully illustrated by this elegant and modern documentary which takes us through all the steps of Penguin parenthood. From the first meeting, through laying and protecting an egg, feeding and raising a chick and finally seeing it off to make its own way in the world, it’s all filmed in glorious and intimate detail. 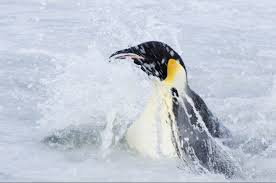 Jacquet spent two months shooting in the Antarctic winter using the new technology of 4K cameras, airborne drones, and under-ice diving to show the astonishing lives of these mysterious creatures in an entirely new light. A fantastic job with visuals so crisp it’s hard to believe they’re real, and while it lacks a little of the surprise impact of the first film, it is nevertheless both stunning and informative, with many brilliant moments, my favourite being the underwater sequences.

A sweeping and melodramatic score from Cyrille Aufort (Hell, Splice) coupled with Morgan Freeman’s unique and somewhat soothing narration serve to set the scenes really well and make the telling of even the sad parts of the story suitable for all ages. He also brings his own brand of gentle comedy which can give life to the most ‘annoying’ of creatures.

A fascinating and thoroughly uplifting watch for the whole family, well worth adding to a stocking this Christmas.

“Courtship always has it’s rituals and Emperor Penguins like to flirt the old fashioned way, by slow dancing…”

March of the Penguins 2: The Next Step is available to buy now on Digital Download, DVD and Blu-ray.