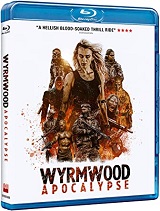 Wyrmwood Apocalypse in a 2022 Australian horror film. Written by Tristan Roache-Turner and Kiah Roache-Turner who also directs, this is the sequel to the 2014 cult classic Wyrmwood: Road of the Dead.

Following it’s UK Premiere at FrightFest Glasgow 2022 it is now available on DVD, Blu-ray and Digital courtesy of 101 Films.

“She’s sick and she’s getting worse. Her and her brother. They’ve gone road crazy. We can’t trust them no more.” 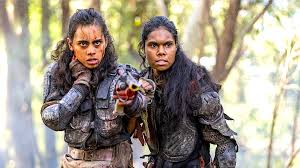 We’re well into the zombie apocalypse and in the Australian outback, zombie wrangler Brooke (Bianca Bradey – The Osiris Child, Turbines) and her brother Barry (Jay Gallagher – Nekrotronic) are busy hunting zombies. They have been travelling with sisters Maxi (Shantae Barnes-Cowan – Firebite) and Grace (Tasia Zalar – Streamline) but following an incident they have gone their separate ways. 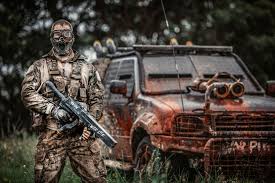 Meanwhile, soldier Rhys (Luke McKenzie – The Flip Side) is living in a homemade zombie proof encampment, fuelled up by good old zombie power. He spends his day collecting survivors and delivering them to the Surgeon General (Nicholas Boshier – Three Summers) and the Colonel (Jake Ryan – Colourblind) who are using them to try to find a cure.

When word reaches them of a zombie/human hybrid, Rhys is dispatched to capture her and it turns out that this is Grace. But there are hidden agendas at play here and not everyone has intentions as pure as they seem.

“You get in your truck, drop your barrels like a good little soldier and f*** off.” 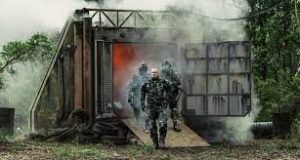 Wyrmwood Apocalypse is a wild, high octane zombie fired rollercoaster of a film, gleefully gory and subversive in a way only the Australians know how. Not having seen the first film I got the impression maybe I was missing some finer points, if there are any, but it didn’t detract from the enjoyment too much. 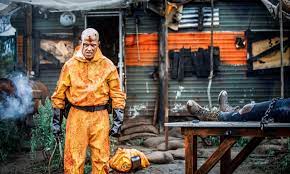 The premise is glorious, somehow zombies can be used to fuel everyday items. Brilliant. The action is fast and gruesome with some excellent special effects. The acting is also really good, with some quality “fighting with your own hand” moments from Nicholas Boshier. As long as you don’t mind weapons grade silliness this film will be right up your street.

Fun filled, gory and darkly hilarious this one is well worth adding to your collection if you’re a zombie enthusiast.

“Hello toots. Would you mind if I cracked open your skull and feasted on the juice inside?”

Wyrmwood Apocalypse is available to buy now on DVD, Blu-ray and Digital.