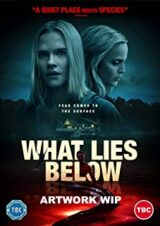 Never Trust Something That is 360 Million Years Old.

Writer/director Braden R. Duemmler brings us his first feature horror/sci-fi tale of a woman that thinks she has found love, but with whom has she fallen in love and what does her daughter think of all this?

Liberty Wells (Ema Horvath, Like.Share.Follow., The Mortuary Collection) has spent the summer at the Diggers camp, a camp for budding archaeologists and geologists. But now it is time to come home with mother Michelle (Mena Suvari, The Murder of Nicole Brown Simpson, Badge of Honor), and they are heading back to their summerhouse by the lakes. 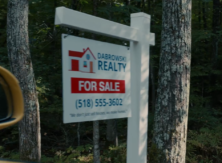 Mother is full of the joys of Spring, much to the annoyance of the sixteen-year-old shy (weirdo) daughter, when they are nearly home she even lets her drive on the private road to their house. Libby spots a for-sale sign but it is only for one of the plots of land around their house due to the fact that Michelle’s romance writing isn’t selling as well as it has done in the past. Libby notices her mum playing with a new watch and wonders where it came from, it was a present, but from whom? You’ll see…

Michelle is eager to show off her new boyfriend, and when there is a shout from the lake Libby gets her first view of John (Trey Tucker, The Outpost, The Space Between Us).

Libby is instantly won over by John’s rugged good looks and sees why her mother is so taken with her catch. John has all the looks, physique and the manners of the

perfect gentleman, he even has an appropriate present for the budding archaeologist, a Navajo Stone of Life bracelet that is connected with fertility.

There has to be something wrong with this guy, but the girls are too busy just looking at him to see anything else. Libby actually puts on a dress for lunch as she drinks in John toned body, but it is her mom that is getting all the sugar. Libby asks how they met and it is down to Michelle to explain that when

she came to the house early in the year to do some repairs, she was writing on the porch when aquatic geneticist John suddenly appeared into her life, and now they are an item. Now he is studying the 360 million-year-old lampreys in their basement, not creepy at all.

Libby’s obsession with John takes her over and when late at night she is passionately thinking about him she hears a noise from outside that brings her attention back to the real world. What she sees out of the window beggars belief, there is a strange glow emanating from the lake and what is more John is in the water heading for the glow until he is completely submerged.

What has Libby discovered?

What Lies below is a steady creepy tale that doesn’t shake the tree too hard, but the acting is decent with the subject at hand. One to hide behind the cushion with. 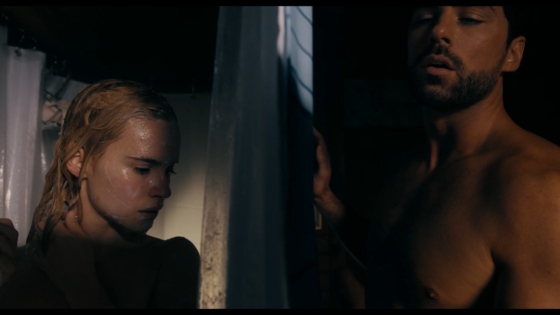 What Lies Below is available on Amazon, and ITunes