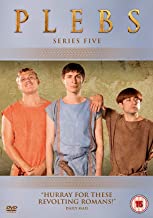 Plebs is an ITV2 series, written by Tom Basden (After Life, Quacks) and Sam Leifer (How Not To Live Your Life), who also directs.

Plebs is a long running T.V. series which began in 2013 and this release is series 5, although it stands alone quite happily, there’s no real need to have watched the others in order to enjoy this.

“Shavings aren’t really a quantity I recognise. Go on, give us another bite…” 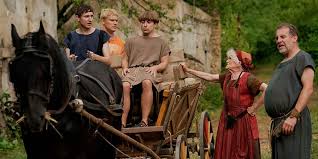 It’s 23 BC in Rome and the general population are facing the usual day to day struggles. Marcus (Tom Rosenthal – Broadchurch, Friday Night Dinner) and his best friend Jason (Jonathan Pointing – The Great Unwashed, Pls Like) are still (largely unsuccessfully) running their wine bar, the Crown and Toga, which is situated in a renovated public toilet. 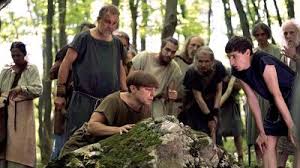 Also side by side with them are co-owner Aurelius (Tom Basden) and Grumio (Ryan Sampson – Afetr You’ve Gone, Waiting), Marcus’s food obsessed and very lazy slave, who can always be counted upon to find trouble.

The lads enjoy a wide variety of adventures in this series, including a trip to Tuscany to purchase wine for the bar, gatecrashing a banquet and falling in love with Rufina (Amanda Holden – Wild at Heart, Jonathan Creek), and attempting to drum up business by filling the bar with chariot hooligans of various colours. 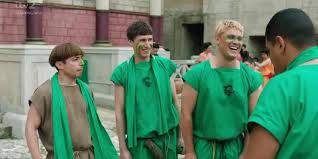 Marcus also devotes much of his time to chasing after Gloria (Ellie Taylor – The Mash Report, The Lodge), the owner of the laundrette next door, while at the same time trying not to get too involved with his shady Landlord (Karl Theobald – Primeval, Sick Note) and Landlady (Maureen Lipman – Educating Rita). 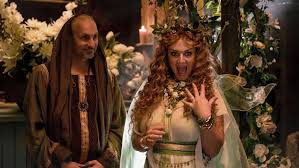 Plebs is a highly entertaining watch, cleverly written and frequently laugh-out-loud funny.For a 15 certificate the language and themes are pretty fruity and it’s politically incorrect brand of adult humour is very refreshing.

Packed with familiar faces and excellent acting, as well as a rousing Ska soundtrack, Plebs is a must own for the discerning comedy fan, well worth adding to your collection.

“Can you stop making that weird sucking noise? It’s like sleeping in a sink…” 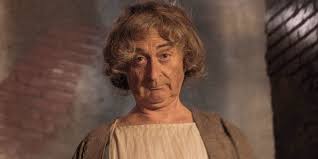 Plebs is available to buy now on DVD.