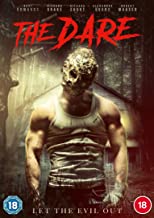 The Dare is written by Jonny Grant (Bright Light) and directed and co-written by Giles Alderson (Arthur and Merlin: Knights of Camelot). Soaked in gore from start to finish, this is an extremely satisfying revenge torture horror film, with a Stockholm Syndrome vibe.

“Your mother and father are scum, they abandoned you. If they cared about you they’d have come looking for you, now wouldn’t they?” 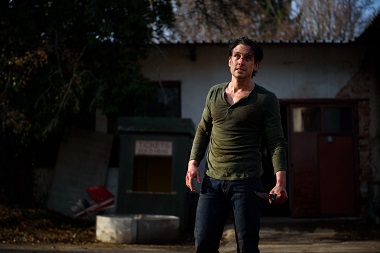 Jay Jackson (Bart Edwards – The Witcher, State of Happiness) is a young father, working hard and often away on business, enjoying a rare evening with his wife Jess (Devora Wilde – The Tombs, Stolen Life) and two daughters Poppy (Lelia Yvetta – 2: Hours) and Molly (Emily Haigh – Sorority). Their fun is rudely interrupted by a hooded home invader, who leaves Jess unconscious and abducts Jay. 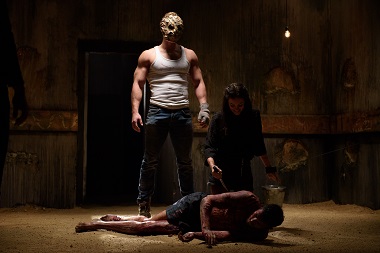 When he awakens, he finds himself chained up in the the corner of a room which he shares with three other people. Introductions are made, there’s Adam (Richard Short – Mary Kills People), a security guard taken during a night shift, Kat (Alexandra Evans – Silent Witness), taken on the way to her car and Paul (Daniel Schutzmann– Doctors)  who is in very poor shape and cannot talk.

They are being kept in this room and tortured by an unknown individual, who hides his face beneath a mask of skin and loves blood, pain and gore. None of them has any idea why they are being held against their will. 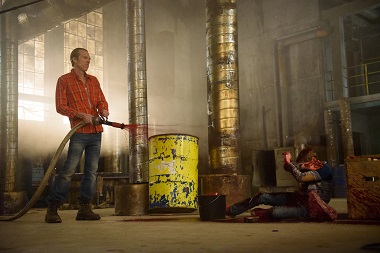 At the same time, we are shown the fate of a young boy named Dom (Mitchell Norman – Giantland), for some reason being forced to live with sadistic pig farmer Credence (Richard Brake – 3 From Hell, The Royals), terrified and tormented but gradually learning to relate to him. We know all these things are connected somehow, they must be, but how and who will survive this brutal ordeal?

The Dare is a very violent and bloody film, with graphic torture scenes and extremely good special effects. It is most certainly not one for the faint hearted and is fully deserving of it’s 18 certificate. The acting is pretty good and the story is engaging and makes sense. 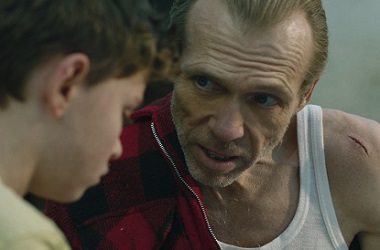 It carries a strong message, actions have consequences that can come back to bite you at any time and that is certainly the case here. Although it is reminiscent of Saw, it has its own narrative and ideas and stands up well in the genre. It has some fun twists and keeps you on your toes right to the end. If you are a gorehound then you will not want to miss out on this gem.

“See, this must have been a mistake, cause I’m a good person. I didn’t do anything wrong. You see, I do charity, I gave blood once.”