5 Stars All the Way There 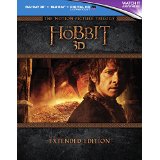 Peter Jackson in a Box. What more could you Want!

The Hobbit 3D, All three films in wonderful 3D, now available in the extended versions. Jackson takes us through J.R.R. Tolkien‘s prequel to the Lord of the Rings Trilogy (also by Peter Jackson), covering The Hobbit: An Unexpected Journey, The Desolation of Smaug and The Battle of the Five Armies.

Smaug has been released from Lonely Mountain and is headed for Laketown to wreak his vengeance on man, as Bilbo (Martin Freeman, The Hobbit: An Unexpected Journey) and the dwarfs look on helpless. Bard the Bowman (Luke Evans, Dracula Untold) languishes in prison while Smaug lights up the

evening sky and the wooden houses, as the women scream and so do the men. Bard manages to get free using the Master of Laketown ( Stephen Fry, V for Vendetta) as leverage and he is the only one trying to bring down the behemoth that is Smaug. His efforts fail until his son reminds him of the last “Black Arrow”. He manages to hit the one spot the dragon is vulnerable in, sending it crashing into the blazing homes and the town’s canals.

Thorin (Richard Armitage, Into the Storm) now takes his place on the throne of Lonely Mountain, his rightful place if he can retrieve the Arkenstone

which lies within Bilbo’s pocket, where it should remain for now as Thorin has taken to the “Dragon sickness”.

Meanwhile Azog (Manu Bennett, 30 Days of Night) is released to the surface by his Ringwraiths to take siege of Erebor, whilst he sends Bolg (John Tui, Battleship) to Gundabad to summon their second army.

Legolas (Orlando Bloom, Kingdom of Heaven) and Tauriel ( Evangeline Lilly, Real Steel) are witness to the march of Bolg’s army, which is bolstered by Goblins and giant bats. 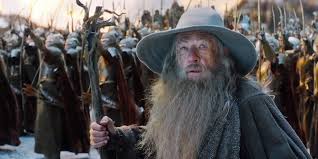 All things are coming to a head and no one will give sway as Thranduil (Lee Pace, Guardians of the Galaxy) makes a pact with Bard in order to retrieve something precious from the lonely mountain.

Epic battles with orcs, goblins and other monstrous beasts ensue as you would expect with Tolkien and Jackson.

Book a lot of time off from everything apart from toilet breaks and starvation and sit forward grab the edge of your seat as you are in for one, two and three heck of a ride.

This is the definitive 15 disc version of the Hobbit story. Thank you Mr Jackson.