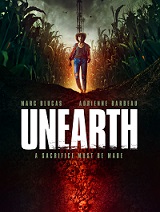 Unearth is an American horror film, written by Kelsey Goldberg (Painting Autumn) and John C. Lyons (Schism), who also directs alongside Dorota Swies, who makes her directorial debut with this film.

“Is that right? Well I’d like to talk to you about the opportunities inside the barrel of my shotgun. Why don’t you stay here? I’ll go get it.” 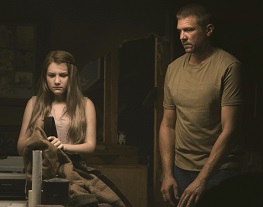 George (Marc Blucas – Buffy the Vampire Slayer) is a struggling mechanic, running a failing auto-shop which is gradually losing custom to big chains. He is trying to pay off the medical bills for his daughter Kim (Brooke Sorenson – Mr. Iglesias) who has a small child, and put his other daughter Heather (Rachel McKeon – Jessica Jones) through college. 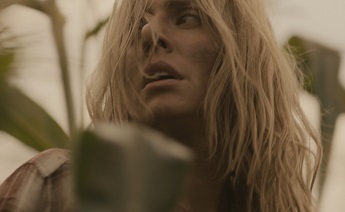 He has a love interest in the form of Christina (Allison McAtee – We Summon the Darkness) who helps out at the neighbouring farm. The farm is run by Kathryn (Adrienne Barbeau – General Hospital, The Fog) along with her son Tom (P.J. Marshall – Mindhunter) and his wife Aubrey (Monica Wyche – The Defenders) who is Christina’s mother.

The relationship between the two neighbours becomes fraught when George is approached by Eddie Drake (Chad Conley – The Chop), a representative of Patriot Exploration, a gas-extraction company. 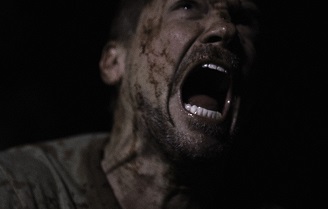 They offer him a substantial amount of money for his land and a cut of the revenue from the gas.

One year later and with a full scale fracking operation underway at his farm, it soon becomes apparent that relations with his neighbours are the least of his worries, as the machines tap into something that has laid buried and should have remained that way. As the land rots and people begin to fall ill, what have they unearthed? 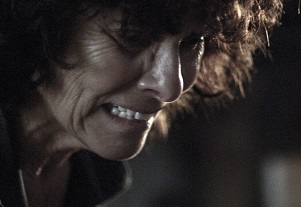 Unearth is a very good idea for a story. Unfortunately it doesn’t quite realize it’s potential here. It feels like two separate films, the first hour is a grim and drawn out family drama, full of over complicated and strange relationships and in depth character development. 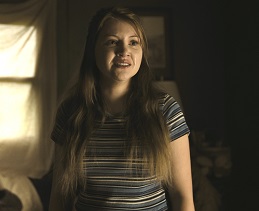 All this preparation is then suddenly and randomly thrown out of the window as it degenerates into a free for all of tentacles, open wounds and rampaging insanity, filmed in a strange blurred style so you’re never quite sure what’s going on.

The acting is excellent and the effects (when you can make them out) are good too and it’s certainly worth a watch. It’s just a shame that the message “fracking is bad” is pretty much lost in all the confusion.

“Well, if it isn’t the house wife without a husband. Your Daddy’s cash cow starting to produce?”