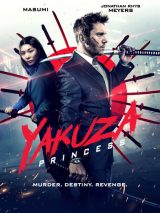 Legacy, Amnesia and a Bloodthirsty Sword.

Based on the Brazillian graphic novel Samurai Shiro by Danilo Beyruth (Motorrad), film and TV director Vicente Amorim (The Division, The Middle of the World) recreates the graphic novel with his style of filmmaking, as we get  to know our players and establish a backstory that plays out like an origin story, and the end of the film may hint at a sequel.

Osaka, Japan, twenty years ago and a family is having a get together, and it is a party atmosphere as children play and shrieks in the summer sun. A young boy tries to pull the family sword from its scabbard but is told off just as gunfire rings out and other swords are swinging through the crisp clean air. The family is wiped out, except for the little girl, who is whisked off to safety.

A badly damaged man (Jonathan Rhys Meyers, The Tudors (TV Series), Vikings (TV Series)) lies in a hospital bed, he wakes up and doesn’t recognize anything around him. He panics and tries to leave, but he is restrained and sedated and returned to his bed. Elsewhere in the largest community

of Japanese descendents outside of Japan is Akemi (MASUMI, Run Baby Run (Video short)) and her Kendo sensei, Akemi is still dealing with her childhood trauma some fourteen years after the massacre of her family.

Let discipline shape your spirit and mind. Your life may depend on one strike, one blow.

Back in the old country, Yakuza henchman Takeshi (Tsuyoshi Ihara, 13 Assassins, Ninja) learns a deadly secret which sees him heading for Brazil.

In the hospital, our damaged soul is being interviewed by police in connection with a Katana sword with an emblem on the blade. He still has no recollection of the sword or anything about his life before he woke up in the hospital, not even his name. He has healed enough to get out of bed and find clothes before causing a distraction to escape the hospital with the sword. Not only that, but he believes this sword is the key to his destiny and his past. The blade leads him to Akemi in her moment of need, and they form an uneasy alliance. As he seeks to find his past, and she is about to find out her future role in life.

It’s a fight to stay alive as those that thought they had destroyed Akemi’s family find out the heir to a syndicate still lives, and they must rectify their mistake.

I won’t be trapped by a past that is not mine to bear.

Yakuza Princess is purely a moving graphic novel with plenty of blood and over the top action, but that is the appeal of this genre, so if you are a fan, this film is for you.