Lana and Andy Wachowski have written and directed this flashy sci-fi extravaganza, with amazing special effects and CGI, and a full closet of pretty clothes. This is a feast for the eyes, and if you haven’t seen Sci-Fi before this is a good way to get into it. The story is an “I want what you’re entitled to” story, but the visuals of the film (if you are a sci-fi addict like me) will have you saying “Isn’t that just like….?”. So take the biggest healthiest bucket of Popcorn and sit back and enjoy as the Wachowski duo take you across the Universe.

Maximilian Jones (James D’Arcy, Let’s be Cops) is a stargazer. He does it through his favourite telescope and this is where Aleksa (Maria Doyle-Kennedy, Dexter) finds him on a freezing cloudless night in Saint Petersburg, looking up at the myriad of sparkling points of light. Soon they are a couple and expecting their first child, to be called Jupiter. But soon it all goes wrong for them as they are robbed at home at gunpoint, resulting in Maximilian’s demise. This leads to Aleksa fleeing the country with her family and heading for the US, on route she gives birth to her daughter ‘Jupiter’.

Jump forward in time and we now find Jupiter Jones (Mila Kunis, Ted) as a young woman doing what she believes are menial tasks to make ends meet and save up for a telescope that reminds her of her father, but they cost thousands of dollars. A relentless life of drudgery is what Jupiter sees ahead of her, but her cousin comes up with a plan. Jupiter will sell her eggs for $15,000, ten for him, five for her. However, she does it under an assumed name, one of her clients Katherine Dunlevy (Vanessa Kirby, The Necessary Death of Charlie Countryman). But unbeknown to her and any other human, she and everybody on the planet are someone’s property, the owner was the

recently demised matriarch of the House of Abrasax, and now siblings are vying for the spoils, Balem (Eddie

Redmayne, My Week with Marilyn), Kalique (Tuppence Middleton, The Love Punch) and the man that has sent a hunter out to find the next heir, Titus (Douglas Booth, Noah). Everybody is after the heir and that heir is Jupiter, an exact genome match of the now dead matriarch. It is a race to see who will get to her first. The Keepers (greys), The bounty hunters Ibis (David Ajala, Emulsion), Razo (Doona Bae, The Host) and Falque (Spencer Wilding, Wrath of the Titans) or will it be ex Legionnaire Caine Wise (Channing Tatum, The Lego Movie)? Will Jupiter accept her inheritance, if she survives everything that CGI can throw at her? 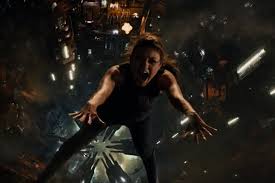 All in all this is a romp, with great effects and a straightforward story. There is over the top action for those who like that and plenty of pretty things for those who prefer the finer things in life. It also features Sean Bean as Stinger Apini (Lord of the Rings: Fellowship of the Ring) in a supporting role, always worth a watch.