4 stars for the conclusion of this kick-ass anime. 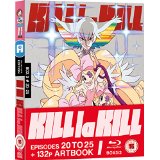 Kill la Kill Collector’s Edition Part 3 comprises the final 5 episodes of the series, plus an OVA, Goodbye Again, not originally shown. It also includes a 132 page art book and a limited edition box to hold the entire series (exclusive to the UK release). 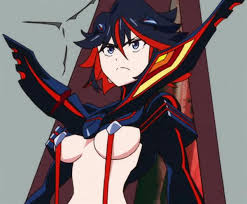 Ryuko Matoi is a student at Honnouji Academy, however she is no ordinary school girl and this no ordinary school. Her reason for going to this particular school is simple. She wants to track down the wielder of the scissor blade that killed her father, the other half to match the one she herself carries.

The student council of the school, led by Satsuki, all wear powerful living uniforms known as Goku uniforms to rule with menaces and all seem to be tied into the mystery surrounding his death. Ryuko has been battling them for a long time, but now a greater threat has revealed itself and everyone must try to put aside their differences. 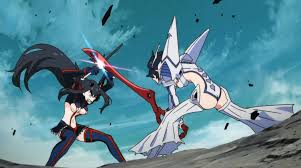 After a battle in which she believes herself to have changed into a monster, Ryuko has vowed never again to wear her living armour Senketsu. When her mother Ragyo and crazy yet immortal Nui arrive to taunt her, she follows them back to Honnouji Academy to confront them alone. 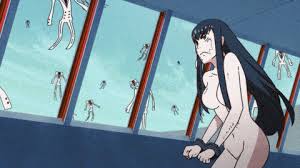 However, with Satsuki captive and Covers (an animated army of clothes, powered by living threads) taking over the country, the Elite Four (members of the student council vowed to protect Satsuki) and Nudist Beach (a rebel group created to battle against living fibres and COVERS) are not about to let that happen, so they reveal their amazing secret weapon, the Naked Sol and head off after her to help. 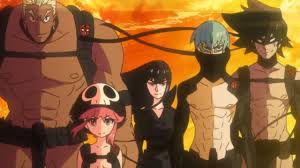 Kill la Kill is gloriously colourful and action packed and extremely quirky. With it’s very thinly veiled sexual innuendos it is certainly deserving of its 15 certificate and leads to much hilarity. Probably the best example of this is  Aikurō Mikisugi, one time home room teacher and now known member of Nudist Beach, whose pink glowing nipples (and other bits) are a constant source of entertainment.

The animation is clever and fast paced and keeps the attention going all the way through, which is always a bonus. This is a great series and well worth adding to your collection, especially with the added incentive of a nice box to keep it all in!

“When you access the life fibre’s powers you’re in danger of succumbing to them. Direct contact with your skin must be kept to a minimum, that is what synchronisation is for. If you want to call it anything, call it genius.”