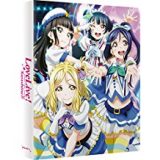 Love Live! Sunshine!! is produced by Sunrise (Horizon in the Middle of Nowhere, Good Luck Girl!) and directed by Kazuo Sakai.

It is a spin off from the popular anime series, Love Live!, featuring a different cast of characters with the same ambitions.

“To be consumed by your very passion. To have a special dream.I’ve never had that kind of feeling before…” 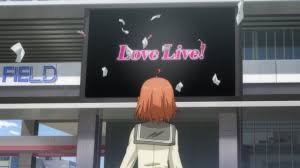 Love Live sunshine tells the story of high-school student Chika (Jad Saxton – Rage of Bahamut: Genesis), who has spent her life flitting from one interest to the next, never really settling on anything until the day she sees the Love Live! competition.

She becomes obsessed with the School Idol band μ’s and decides to set up a School Idol club at her own school, Uranohoshi Girl’s academy. Unfortunately, even with the support of her best friend You (Apphia Yu – Noragami, Assassination Classroom) she still only has two members and a minimum of five is required to start a club. 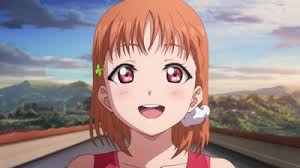 They also run into opposition in the form of Dia (Morgan Garrett – No-Rin, Ben-To), the third head of the student council, who is inexplicably opposed to the idea of having a School Idol club.

Another stumbling block is the fact that they must compose their own music, however when piano student Rika (Jeannie Tirado – Grimgar: Ashes and Illusions) transfers to the school they may solve that problem if they can only persuade her to join. 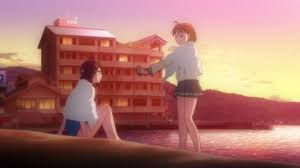 They do have an ally in rich girl Mari (Jamie Marchi – Tokyo ESP, Free! Eternal Summer), the new school director, who has heard that the school is to be merged and feels they could use the club to try and save it.

Chika has her sights on lots of girls to join, including Yoshiko (Morgan Berry – Tokyo Ghoul), Hanamaru (Megan Shipman – Show by Rock!!) and Ruby (Sarah Wiedenheft – Gonna Be the Twin-tail!!). Can this group of girls rise through the rankings and save their seaside high-school from being merged? 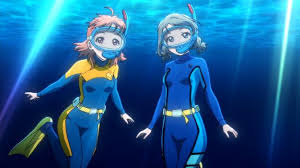 Love Live Sunshine is an enjoyable watch, with lovely animation and a twinkly, if a little generic, soundtrack. It is full of energy and enthusiasm and messages of hope and optimism about following your dreams in the face of adversity.

Uplifting and happy, this is a good addition to the franchise and would grace any collection.

“I knew I wanted to do this with my own friends. I wanted to inspire others like me. I felt passionate, but mostly I learned that I wanted to shine.”

Love Live! Sunshine!! is available to buy now on Collector’s Blu-ray and DVD.