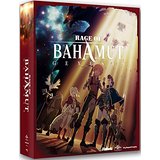 Rage of Bahamut: Genesis is an anime based on the highly popular digital card battle game by Cygames (Shadowverse).

When I first saw that this is based on a card game, my heart sank (think Yu-gi-Oh!) but to my immense delight, you don’t have to sit for hours watching people play cards, it simply tells the story. 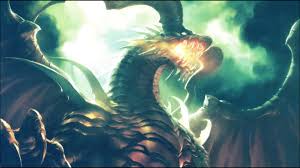 It is set in a world called Mistarcia, where two thousand years previously, the being known as Bahamut threatened creation and was finally sealed by a God Key, formed from Zeus and a Demon Key, formed from Satan. If the two keys are ever reunited Bahamut will awaken and now someone has stolen the God Key and runs the risk of ending everything. 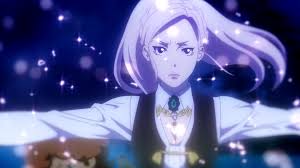 This was always going to get him into trouble and indeed it does, as his tales of his exploits in Helheim are overheard by a mysterious young woman named Amira (Tia Ballard –Lord Marksman and Vanadis), who desperately wants to get there. Favaro of course has no idea how to get there, but offers to take her anyway for the price of a kiss.

Unfortunately, she is a demon who slaps a contract agreement on him, meaning she gives him a tail she won’t remove until they get there. Things are most definitely not as they originally appeared and our two hapless bounty hunters are drawn further and further into the affairs of the Gods and the angels. 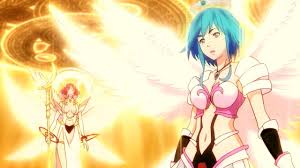 They encounter a mind bogglingly diverse array of both allies and enemies, including the zombie, ex necromancer Rita (Apphia Yu – Guilty Crown), the God Bacchus (Brian Mathis – Tokyo ESP) and the Maiden Saint Jeanne d’Arc (Jad Saxton – High School DxD). Will our unlikely heroes be up to the job of saving the world?

Rage of Bahamut: Genesis is the perfect series for fans of sword and sorcery. It is laugh out loud funny from start to finish, cleverly written and throws in a bit of everything. Where else can you get gods, demons, dragons, zombies and Maiden Saints all in one place?

The opening music is sensational, very in your face and the animation all the way through is glorious, beautiful to look at (although Favaro did remind me very much of Dungeons and Dragons, a real blast from the past!)

A great series, well worth adding to your collection.

“Who brings a horse into a tavern? You know you’re losing those bounties while you’re chasing me.” 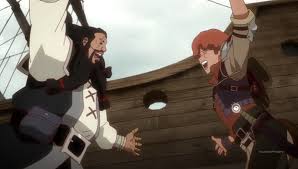