4 stars for these lavishly animated yet twisted anime feature films. 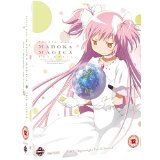 There are some big names involved in this project, with screenplay by Gen Urobuchi (Psycho Pass, Gargantia on the Verdurous Planet), chief director Akiyuki Simbo (Bakemonogatari), director Yukihiro Miyamoto (Arakawa Under the Bridge) and art director Ken Naito (Nisekoi: False Love) and it most certainly doesn’t disappoint.

These two films retell the story of Puella Magi Madoka Magica the series, with some new scenes and with improved and incredibly beautiful animation.

Madoka Kaname (Christine Marie Cabanos – Kill la Kill) is a perfectly normal and happy school girl, who lives with her loving family and likes nothing more than hanging out with her two best friends, Sayaka Miki (Sarah Williams – Nura: Rise of the Yokai Clan) and Hitomi Shizuki (Shelby Lindley – K On! The Movie). 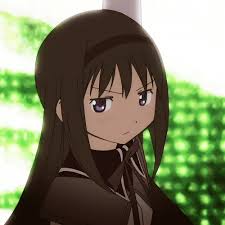 One day though, things take an odd turn when a new and rather mysterious transfer student, Homura Akemi (Cristina Valenzuela – Bleach) joins their class. Shortly after her arrival, she manages to get Madoka alone and issues her with a strange warning, stay the way you are or you risk losing everything. This is most unusual coming from someone she has never met, so she pays it little mind.

Later in the day however, when out with the girls, she follows a voice in her head and finds a small injured creature of a type she doesn’t recognize. When she tries to rescue it, Homura shows up to stop her, explaining that it is dangerous but she takes it anyway, only to find herself thrust into a terrifying new world, from which she and Sayaka are rescued by Mami Tomoe (Carrie Keranen). 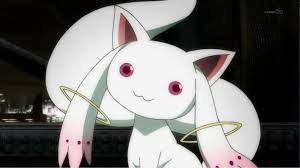 The creature identifies itself as Kyubey (Cassandra Lee Morris – Patema Inverted), a being who wants to make a contract with Madoka and Sayaka, which will make them magical girls in return for which he has the ability to grant any wish they make. To pay for the wish, a magical girl must then devote her life to killing witches, terrible cursed creatures who create elaborate labyrinths in which to hide. 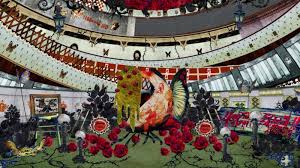 The girls must decide what, if anything, they want badly enough to risk their lives and choose whether to start down a path having no idea where it leads.

Puella Magi Madoka Magica is a great story, jam packed with surprises from start to finish, with interesting and engaging characters and a very gritty and down to earth feel to it, despite it being a fantasy.

The animations are stunning, if very unorthodox in places. When the girls are inside the witch’s

labyrinths it changes style very dramatically to something more like a collage but far more impressive and very disconcerting. Some of them are a bit Monty Pythonesque, fantastic.
It would have had 5 stars but there are a few places where it is confusing and sometimes things are a bit hazy on the details.

But overall, highly recommended, a real feast for the eyes and a shock fest of twists and dark sinister turns.

“If magical girls are said to be born from wishes, then witches are born from curses. Magical girls bring hope to the world, witches bring despair. And since they’re invisible to humans, they’re that much more insidious.” 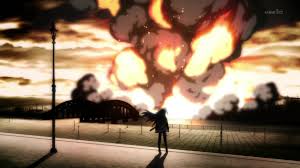 Puella Magi Madoka Magica The Movie: Part 1 and Part 2 – Beginnings/Eternal is available to order online now and will be released on 12th October 2015. It is also available as 2 separate films on DVD.