Season 9 is the last in this long running series in both anime and manga from the pen of Akira Toriyama, spanning episodes 254-291. 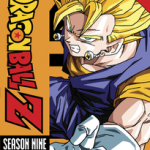 Majin Buu the much feared fighter has had a change of heart after Bee (a little puppy) came into his life along with Mr Satan/Hercule the World Champion Fighter. 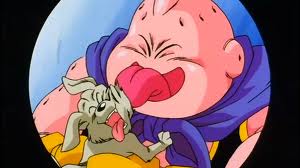 Can this ruthless fighter truly be a changed man? Maybe but things change when the people on the hill start firing on Buu’s house.They shoot Bee but Buu is able to resurrect him when the  shooting stops.

Later the house is rebuilt to look like a big Bee (the dog) and Mr Satan and Buu are getting on surprisingly well. Mr Satan is cooking tea when one of the earlier shooters creeps into the kitchen and confronts Mr Satan, then shoots him dead.

Buu tries his hardest and revives Mr Satan and this causes the basest instincts within Buu to fight, which causes Buu to expel all his evil from his body in the form of steam, but this coalesces into the solid figure of Evil Buu who obliterates the gunman.

All this is being watched from the lookout as they detect the life-force that has become the leaner meaner Evil Buu. The two Buu’s fight it out until an ill-prepared move on good Buu’s part sees him turned to chocolate which Evil Buu readily devours.

This causes another change as Evil Buu becomes the pink skinned Super Buu. 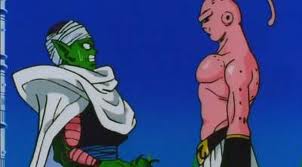 He can now detect the power within people and flies up to the Lookout and confronts Piccolo and wants to fight Gotenks, but Piccolo knows that they are worn down so he sends word that the boys should be put in the Hyperbolic Time Chamber to give them time to recover and train. To stall Super Buu Piccolo tells Buu that he can spend time looking at Earth.

As Buu circles the Lookout, he stops and raises his arm and fires the Human Extinction Attack,which fires out a million beams and destroys everyone on Earth apart from four, Mr Satan, Tien Shinhan, the dog Bee and Chiaotzu. 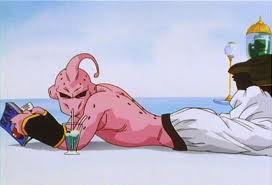 Can the fighters defeat this Buu as they fight across the planet or will Super Buu destroy all before him through all dimensions?

This is the great question as you immerse your self in the Fusion saga and the Kid Buu Saga.

This is Great fun and wasted on children as the comedy is great and full of death and mayhem.

Available to buy on DVD from Monday 21st October 2013.