4 stars for the next part of this fantastic anime series. 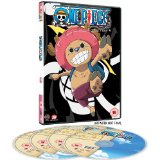 The start of this collection sees the Straw Hat Pirates, still on the Grand Line and on board the Going Merry, engaged in a battle with the evil pirate Wapol and his band of misfits. 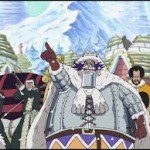 With Wapol dispatched (for now), the crew must find a doctor for Nami, who has been struck down by a life threatening fever while in Little Garden. They spot a winter island in the distance, which they hope will have medical facilities. This turns out to be Drum Island, where they land and are immediately attacked by the militia.

However, after some negotiations by Vivi, Dalton, the leader agrees to help and explains the predicament that the island is in. This story arc is as gloriously weird as all the others so far, with giant Hiking Bears and snow-boarding carnivorous bunny rabbits. Not forgetting the lovely Chopper, the Blue-Nosed Reindeer (soon to become the doctor on board The Going Merry – a vital new member of the team). 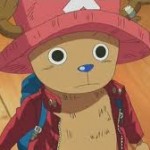 The second part of the collection is the start of the Alabasta arc, the final instalment in the Alabasta Saga.  When the Straw Hat pirates finally reach their destination, the desert island of Alabasta, the home of Princess Vivi, more crazy adventures are sure to ensue!

The animation style is as goofy as ever, as are the characters, created by Eiichiro Oda, whose imagination is seemingly endless.  The episode titles are quite mind boggling, seeming to make no sense until you watch the episode, at which point you realise that they actually described exactly what happened (e.g. A Raid! The Tin Tyrant and The Tin Plate Wapol!). 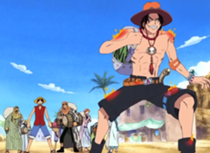 I think it is fair to say that we all carry a little bit of love in our hearts for pirates and all things swashbuckling and the Straw Hat Pirates take that to a new level with their variety of combat skills and devil fruit powers.

With plenty of laugh out load humour and great story-lines,  this is a must have for any self-respecting anime collection.

“I’m Going To Be King Of The Pirates!“

One Piece Collection 4 is available to buy now on DVD