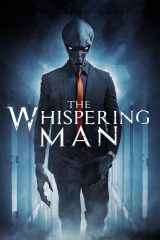 The Master of Found Footage Strikes Again and Again.

Once again the all round writer, director, actor, producer József Gallai (Spirits in the Dark, A Guidebook to Killing Your Ex, Moth, Bodom) collaborates with writer, producer, blogger Bálint Szántó (Gone, Parallel) to bring us a spine chilling tale of possession. Again they put Hungary’s indie film scene on the map, for consistently supplying us with edge of the seat thrills.

The film starts with the statement,

“The following was compiled from the footage filmed by Mark H. and other materials that were leaked online. Footage held, partially edited and archived by police.”

The film is set in SIóFOK, Hungary, where Mark (Dávid Fecske, Guerilla) is a blogger investigating the supernatural, in his online show ‘Chasing Fear’. He lives with his brother

Tommy (András Korcsmáros, 100 Degrees Below Zero) and his girlfriend Dora (Ágota Dunai, Spirits in the Dark).

Along with his friend and expert on all supernatural events Abel (Dávid Kiss, Parallel (Short)), they have been friends for ten years. Mark has a new project and it is from his own family. Mark’s Grandmother has recently passed away, their Grandfather had died years earlier and Mark is fascinated by a painting that his Grandfather had purchased from his old employers many years ago. 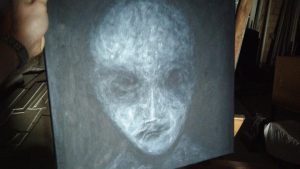 Their Grandfather was obsessed by the painting and their Grandmother hated it and dubbed it ‘The Whispering Man’, saying that there were strange noises and sounds that emanated from it and when their Grandfather passed away she wrapped it and put it in the attic.

Now Tommy and Mark have to clear the house of personnel effects along with documents, but Mark only has one mission in mind, find The Whispering Man. 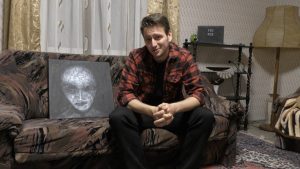 With the painting recovered, Mark sets about investigating the painting along with Abel and Chasing Fear will have new episodes as Mark sets up cameras all over the house to document the mysteries of The Whispering Man.

The Whispering man has quite a history, as Mark finds out as he delves deeper

and deeper into the lore of the painting and how it came into his Grandfather’s possession as well as where it had resided before that and the effects it had on its owners and those around it. All the while the brothers try to find out why their father disappeared after their marriage failed. And it is always a sensible idea to hang a creepy painting on your bedroom wall.

The Surreal Project has it all, slick filming style with you in the thick of Marks investigation as he trolls the scenery of Hungary’s creepy old buildings, with the sound effects happening at the right time and the “What the Feck” moments really make you hide away.

Dávid Fecske as Mark really steals the show as he is addressing the camera a lot of the time as the investigation progresses down a very slippery slope.

Watch this space for updates.