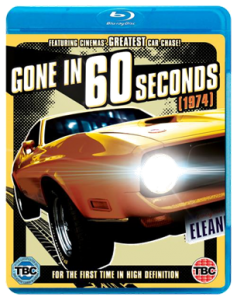 That’s if your a petrol head, otherwise this is just a glimpse into the fashions of 1974.

This is the H.B.Halicki (The Junckman 1982) classic chase movie that inspired the 2000 Nicholas Cage, Angelina Jolie remake.

H.B.Haliki directs and also takes the staring role as Maindrian Pace who by day is an Insurance Investigator but by night he and his cohorts run the biggest car theft ring in the city.

Contacted by a South American drug Lord  he is to steal 48 cars from a wanted list, he and his crew go out into the city and steal the cars to order.

Things go well until they get to “Eleanor” the codename for a 1973 Ford Mustang.

This is when the petrol heads in the family sit up and pay attention as we are lead on a 40 minute car chase through the city and the wanton destruction it causes along the way.

The pace is fast throughout the film and I must admit I prefer this version just because of the cars and the nostalgia for the 70’s.

Halicki’s great as he drives through the city, all the other players are just set pieces for the arrival of “Eleanor”.

So buckle up for the ride of the 70’s

Available on Blu-ray and DVD from 20th May.