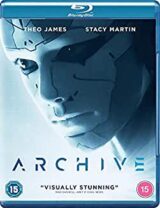 A Classic Sci-fi in the Making.

Writer/director Gavin Rothery (The Last Man (Short)) brings us the best Sci-fi since the brilliant Duncan Jones‘ (Source Code) ‘Moon’ (2009), which he did have a credit in (Art Department). He brings us a terrestrial tail set in the near future, where cars can drive themselves and cyberpunk is in its infancy, and our hero is on a mission to bring back what he wants the most.

What is Life, Consciousness, and Reality?

Picture a man jogging in a forest as it snows, he is heading for what looks like a lair for a ‘Bond’ villain in the middle of nowhere. The

man is  George Almore (Theo James, ) and the lair is where he has been allowed to work doing his experiment on a three-year tenure. His actual job is to get the facility up and running after it was mothballed by ARM heavy industries, and George is there to sort out the security systems and all the failing infrastructure.

He is alone, but this never started out to be a solo venture. His wife Jules (Stacy Martin, Vox Lux, Treat Me Like Fire) should have been with him, but tragedy struck out of the

blue before they got there. So now George has a burning desire to get her back, and has over the last two years been working on AI and robotics to make the perfect replacement for his wife. This is only possible due to George saving

his wife’s consciousness to a ‘Somnolent’ a device that stores a person personality so that after death they can sort out their affairs post-mortem.

George has tried two attempts, the J01, who has the mental capacity of a five-year-old, and J02 who is more like an inquisitive sixteen-year-old, but she still makes mistakes, and she is jealous of George’s present project J03, which is a huge leap in his skills and what he can bring to the world in cyberlife.

There is always a fly in the proverbial ointment, and George’s is Simone (Rhona Mitra, Underworld: Rise of the Lycans) the head of security at ARM. She is changing policies and wants to send an armed security team to his location, but George must keep his secrets secret until he can finish his magnum opus.

Archive is a well written piece of Sci-fi that will keep you glued to the screen. And with a great cameo from Toby Jones (Tinker Tailor Soldier Spy, Captain America: The First Avenger) which lifts the threat level in George’s life.

With great visuals in 03, she really comes to life in this edge of the seat Sci-fi. 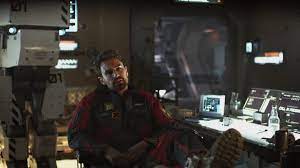 Archive is available on DVD Blu-ray and Amazon Prime