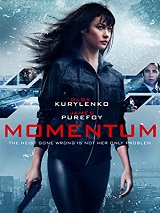 Momentum was originally released in 2015. It is written by Adam Marcus (Secret Santa, Texas Chainsaw) and Debra Sullivan (Conspiracy) and directed by Stephen S. Campanelli (Indian Horse). It was his directorial debut and the lack of experience does show a little.

“The video is embarrassing, the drive is treason.”

Cape Town, South Africa. A band plays kettle drums very loudly and in the adjacent bank, a brutal and vicious robbery is underway. The robbers are kitted out in top of the range tech and are clearly very proficient. They take a container of diamonds, along with a USB drive that was stored with them. There is dissidence in the ranks however, and one of them ends up being shot. Even worse, the face of one of them, a woman is revealed to the hostages. 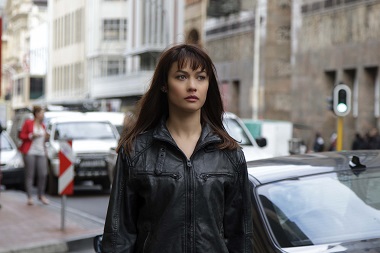 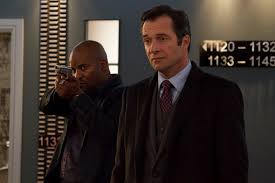 However, Kevin and Alexis’ meeting at a hotel later on is unexpected gatecrashed by some henchmen, lead by Mr. Washington (James Purefoy – Altered Carbon, Ironclad) looking for the USB drive. We now know that the Senator (Morgan Freeman – Transcendence, Hard Rain) has paid them to do the heist, and now he wants his drive back, it contains something incriminating against him.

Kevin has of course realised it’s importance and hidden it, luckily Alexis is able to find it and go on the run. What follows is a brutal game of cat and mouse as Mr. Washington and his cronies will stop at nothing to get what they want.

Momentum is an enjoyable film, but it isn’t without its issues. Although  it has a lot of action and some quite brutal moments (I actually had to look away once and I’m not squeamish), it somehow still seems like not a lot happens. 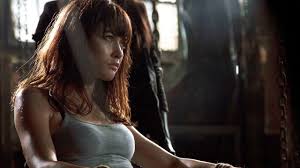 Parts of it are very satisfying, but other parts fall a little flat and the ending doesn’t really conclude anything. There are also a lot of unanswered questions, why does a senator in Washington have a USB drive with incriminating evidence on it, and why is it in South Africa? Also, why send two separate groups after it without telling either of them? Doesn’t make any sense.

In spite of all its flaws though, it’s a decent action film and the characters, although a bit one dimensional, are pretty ingenious and there are some good stunts and car chases. Olga Kurylenko is quite magnificent as always. All things considered, it’s a good watch, well worth a stream.

“If you don’t mind, I won’t take the key, because you’re going to need it to open that locker.”

Momentum is available to watch now on Amazon Prime courtesy of Signature Entertainment.