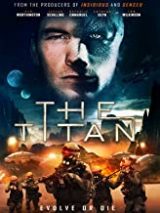 The Future of Humanity.

From three time writer Arash Amel (The Expatriate) comes a foreboding tale of the end of humanity in a couple of decades time. Directed by Lennart Ruff, in his first feature film that shows the strain of what it is to be the hero of humanity even though the populace will not know until it’s too late for the planet Earth.

2048 and the West coast of America is uninhabitable due to nuclear fallout, sandstorms and flooding. Now is the time for an alternative way of life and Lt. 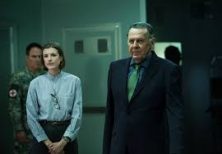 Jupe, The Man with the Iron Heart, Le Mans ’66) are headed to the NATO operating base Atlantic Ocean. Here Prof. Martin Collingwood (Tom Wilkinson, The Full Monty, Rush Hour, Essex Boys) awaits their arrival along with other volunteers for his experimental program.

Pioneering isn’t without its risks. 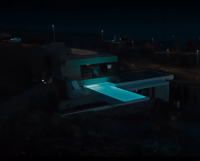 They are met by the Prof’s assistant Dr. Freya Upton (Agyness Deyn, Hail, Caesar!, Sunset Song) who shows them to their newly built hi-tech house and the base has all the amenities that anyone could want for.

It’s beautiful, shame we can’t save it.

Settled in they prepare for the Professor’s ambitious plan to save the human race…colonize Saturn’s moon Titan, and it’s going to take a lot of work and experiment to turn the human body that can breathe and swim on an alien world. Each of the volunteers has a special attribute, Survival. They will need it.

The Titan is a close look at what a family goes through when the planets’ population has no option than going to space and abandon Earth to its fate.

There’s something alive inside him, he’s changing.

What does it take to make a Titan?

The Titan is available on Amazon Prime