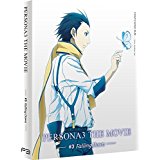 A-1 pictures (Fairy Tail, Magi: The Labyrinth of Magic, Sword Art Online II) brings us the third instalment of the anime based on Shin Megami Tensei: Persona 3 by Atlus. SEES are following Shuji Ikutsuki’s orders and removing the 12 Shadow Arkana from the Dark Hour.

Pharos visits Makoto in another realm and he tells him not to make connections as you don’t want to feel the pain of losing what you cherish. He also says they will not meet again and to be ready for “the Fall”, because it may be the salvation of the World.

Meanwhile SEES battle Takaya, Chidori and Jin who are kidnapping Junpei as the Persona’s battle it out. SEES are victorious and as the smoke clears Takaya

and Jin have vanished leaving behind an injured Chidori. The group are still mourning the death of their friend Shinjiro Aragaki and this is one of the reasons why Makoto starts to shut the others out and harden the shell that is starting to form inside him.

They have been victorious and Takeharu Kirijo is impressed with their endeavours, so now it is party time. And when midnight comes it will all be over when the Dark Hour doesn’t come. So they feast and await the midnight hour.

But nothing has changed. The Dark Hour comes and the sound of bells ring through the yellow sky, The Tartarus Labyrinth still exists. They rush to the site and find Shuji Ikutsuki waiting at the gate. They are confused, but apparently they have all been fooled and the thing that they shouldn’t do is remove the 12 Shadow Arcana!

“Soon Death the Almighty shall rise and bring about “The Fall!””

Aegis has Mitsuru’s father hostage as she is now under Ikutsuki’s control and he wants to use the SEES members as a sacrifice to the one that will come. Mitsuru’s father breaks free and pulls a gun, shots are fired and both men are hit. Ikutsuki orders Aegis to kill the sacrifices.

But Aegis doesn’t want to harm her beloved Makato and manages to resist the remote control and free everybody. Both men die of their injuries. But things have been set in motion “The Fall” is coming. And who is the new kid in class that really wants to be Makato’s friend?

“It is the time of the awakening. A presence that has long slumbered is awakening tonight. It awakes to bring an end to the World.” 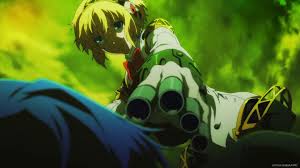