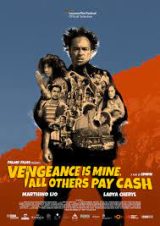 Love can be Brutal.

Vengeance Is Mine, All Others Pay Cash, comes via Indonesia and the alternative streaming service ARROW. From the pen of Eka Kurniawan, from his novel of the same name, and adapted for the screen by himself and writer/director Edwin (Blind Pig Who Wants to Fly, Aruna & Her Palate). The film takes place in the late 1980s, Bojongsoang District, Indonesia. Where our protagonist is always trying to prove himself, ‘the man’.

Mopeds rev, wheels spin, the smell of two-stroke fills the air, as Ajo Kawir (Marthino Lio, Kadet 1947, Mantan Manten), goes on a head-to-head ride to get to the prize bottle of money. He wins, confirming him as the reigning champion. Vengeance is mine… uses a novel method of getting the point across in the form of billboards that tell a story.

Heaven is found at your mother’s feet, only a man that can’t get it up, can face death without fear.

This is Ajo’s fear, since a traumatic event when he was a developing young man he has been impotent. This has caused him to try and prove his manliness ever since in the form of these races and getting into fights just for the heck of it or for someone that wants to get a message across, using fists or butterfly knife. His shadow is his best friend Tokek (Sal Priadi, Imperfect: The Series (TV Series)). 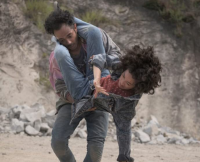 One of these people that need Ajo’s form of justice is Mr Lebe, who got a man deliberately into debt just to get his wife and must be taught a  lesson. At Mr Lebe’s quarry, Ajo finds why Mr Lebe hasn’t been debt with before, Iteung (Ladya Cheryl, Blind Pig Who Wants to Fly, What’s Up with Love?) Mr Lebe’s bodyguard. She will gladly let Ajo have a go at Lebe, but she isn’t a traitor, so Ajo has to go through her. First fight and it is a big one using the quarry as its backdrop. After being taught a few lessons by Iteung, Ajo finally wins, and gets to take his trophy from Lebe. Both fighters are battered, but it is Iteung that offers an olive branch.

I have some Chinese medicine.

This deed gets Ajo noticed, and he gets a phone call from a man that wants another man removed permanently. He will get lots of money for the deed but he is reluctant.

What you, you must be in love.

He is and so is she, but because of his condition, he is very reluctant to show it.

Love is like a disease, It can strike at any time, like thunder and lightning. You can’t fight falling in love.

This is Ajo’s and Iteung’s bloody love story, where we find out what caused Ajo’s impotency and what they would do to right a lot of wrongs. Vengeance Is Mine, All Others Pay Cash is one of the most violent love stories I’ve ever seen, love  it.

Catch it on ARROW streaming site, the Premier is on the 5th August

Check out ARROW’s August slate below

New Titles – From August 5
La Haine
The Weapon, the Hour, the Motive
The Killer Reserved Nine Seats
Smile Before Death
Vengeance is Mine, All Others Pay Cash

New Titles – From August 26
Eyes Without a Face