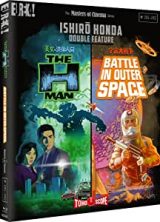 It’s Them or Us

Hoorah. What a Sci-Fi treat, from the writer /director Ishirô Honda (Rodan, A Rainbow Plays in My Heart: Part 1, Mothra, Destroy All Monsters, Return of Ultraman (TV Series)) the legend that brought the world Godzilla (1954-2014) and other famous Kaiju. Masters of Cinema bring us two very influential Sci-Fi and a Horror from the late nineteen fifties, long before man set foot on the moon or knew the effects of radiation on the human body. Prepare to be terrified and proud of the human race.

The first treat is The H-Man, a post-war nuclear tale out in the Pacific Ocean near some famous atolls (depending on whether you watch the Original Japanese version or the edited American version.) The original has a much more criminal element, a drug smuggler Misaki (Hisaya Itô, Five Gents Trick Book, Destroy All Monsters) is caught in one of Tokyo’s storms. As he goes to throw his consignment into the boot of a waiting car he is attacked by an unseen assailant. He fires his gun and falls in front of a moving taxi but when the taxi driver goes to look at the gruesome scene, all that ca

n be found is Misaki clothes, no sign of a body.

Now the police have a mystery on their hands, led by Inspector Tominaga (Akihiko Hirata, Terror of Mechagodzilla) and the only lead he has is the

stunning girlfriend of Misaki, Chikako Arai (Yumi Shirakawa, Be Happy, These Two Lovers, Man Against Man), a singer in a nightclub. Throw in an investigating Dr Masada (Kenji Sahara, Moonlight in the Rain, King Kong vs Godzilla) and we have the makings of a sci-fi classic, mix in melting men then we are in for a sci-fi horror treat. 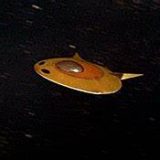 The second film is Battle In Outer Space, another classic from special effects genius Eiji Tsuburaya (Godzilla, Gigantis, the Fire Monster, Mothra, The Lost World of Sinbad, Destroy All Monsters). A tale of all-out alien aggression to the inhabitants of the planet Earth.

Outside Tokyo a train speeds across the islands, ahead an engineer checks the tracks near a bridge, when a strange whirring sound comes from the sky, the temperature drops dramatically and the bridge rises into the sky sealing the fate of the speeding train. Also around the globe, an ocean liner lifted out of the Panama Canal by a waterspout, destroying it; severe flooding in Venice, Italy; and the destruction

of the J-SS3 space station, all this takes place in the futuristic 1965. The Space Research Center in Japan. Major Ichiro Katsumiya (Ryô Ikebe, Desertion at Dawn, The White Orchid), Professor Adachi (Koreya Senda, Gate of Hell, Tora! Tora! Tora!) and Dr. Richardson (Len Stanford) open the conference and describe the disasters and the fact that the aliens are dropping the temperature to absolute zero thus changing the effects of gravity.

The population of Earth comes together, to take the fight to the aliens if they come in force, an

d they do. They set up base in a crater on the moon and now the Earth must take the fight to the aliens.

A true feast for the sci-fi enthusiast in the house, and a brilliant opportunity to see a true master at work.

Also available at the Eureka Store