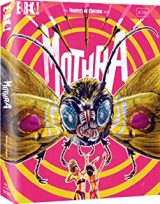 Number #240 in the Masters of Cinema range comes a Kaiju Classic Mothra. From the inventive mind of writer Shinichi Sekizawa (Mothra vs. Godzilla , Invasion of Astro-Monster) and brought into life by director Ishirô Honda (Ishiro Honda Double Feature, Godzilla, Ghidorah, the Three-Headed Monster) and special-effects guru Eiji Tsuburaya (Godzilla, Rodan, The Lost World of Sinbad). Kaiju fans are in for a treat. Mothra! Mothra! Mothra!

Once again Japan is plagued with the devil that is radiation. With Typhoon #8 raging in the Pacific, high winds whip up the waves that are smashing into the 5600 ton ship Genyo-Maru II which is perilously close to the atomic test sites of Infant Island, an uninhabited radiation danger zone.

Damn, we’re sandwiched between the Typhoon and radiation.

But the Maru succumbs to the vicious onslaught of Typhoon #8 and is dashed on the jagged shores of Infant Island and now the search is on for survivors and what state they may be in.

Four souls await rescue on the barren rocks of the shore line and it is a helicopter pilot that manages to spot them just as he is running out of fuel for the return trip. This miracle makes headline news, but on their return they are taken to the National Synthesis Nucleus Centre, but this time no press are allowed into Dr Harada’s (Ken Uehara, River of the Night, Atragon) Centre.

But they didn’t expect the tenacity of Nitto reporter Zen’ichirō Fukuda (Furankî Sakai, The Tale of the Blue Beka Boat, Five Gents Trick Book) and his photographer Michi Hanamura (Kyôko Kagawa, The Three Treasures) who manage to infiltrate his examination of the four survivors who miraculously have no radiation sickness, due to a red juice the Natives of Infant Island h

ad given them… Wait did you say natives?

But… But it’s supposed to be uninhabited and the Rolisican’s have been using it for testing Atomic and Hydrogen bombs. The Japanese bring in linguist Dr. Shin’ichi Chûjô (Hiroshi Koizumi, The Underworld, A Farewell to the Woman Called My Sister, Mothra

vs. Godzilla) due to his work in the Polynesian islands, the Rolisican’s are reluctant at first to be part of the expedition but then comes Clark Nelson (Jerry Itô, Message from Space, The Manster) a man that looks nasty to boot.

With a big send-off the expedition starts and soon they are at the shores to Infant island and the interior shows lush forests holding many secrets.

Mothra is just one of those Kaiju films that you have to love, either for the first viewing or for the hundredth time, a true cinematic legend. 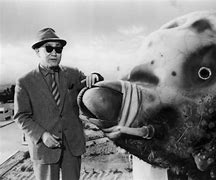 Mothra (Masters of Cinema) LIMITED EDITION is available on Blu-ray