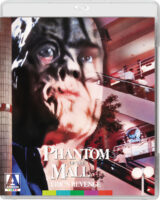 Phantom of the Mall: Eric’s Revenge is an American horror film first released in 1989. It is directed by Richard Friedman (Halfway to Hell, Acts of Desperation) This two disc 1080p Blu-ray release is presented courtesy of Arrow Video and features three versions of the film, the Original Theatrical Cut, TV Cut and bonus Integral Fan Cut. Packed with special features and related items, this is a great package for the discerning fan of eighties slasher flicks.

“I think I know what’s going on, I just need to verify some facts. You need to tell me what happened at Eric’s house that night.” 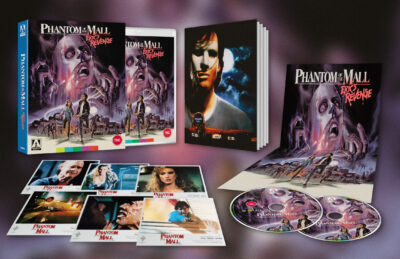 The town of Midwood is celebrating a momentous occasion, the opening of their shiny new mall. It’s a great opportunity for the teenagers of the town as friends Melody (Kari Whitman – Men at Work, Something to Believe In), Susie (Kimber Sissons – Double Tap, Echo of Blue) and Buzz (Pauly Shore – Opposite Day, Guest House) get jobs there ahead of the Grand Opening. 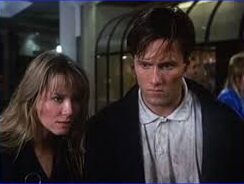 Melody is still traumatised from the events of a year ago, when her boyfriend Eric (Derek Rydall – Night Visitor) was killed in a house fire after saving her life. She is haunted by what she saw, a man (Gregory Scott Cummins – Bosch, Cliffhanger) with a silver medal for an earring standing over her with petrol. In fact, the mall is built on the very same spot where Eric’s house once stood. 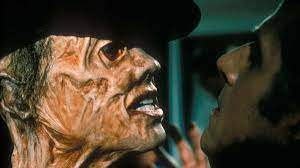 Could the two be connected? Journalist Peter (Rob Estes – After We Collided, 90210) seems to think so and with Melody in his sights, he is very much on the case.

Unknown to everyone, a shadowy figure is stalking the air vents and backstage areas of the mall, taking out anyone who threatens Melody or her friends in various inventive ways. The teens soon begin to suspect that Eric may not be quite as dead as they thought. Who is this masked stranger?

“I knew it. That was Eric tonight.” 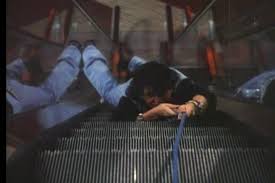 Phantom of the Mall: Eric’s Revenge is a very entertaining film, packed with lots of comedic gore, body parts in the frozen yoghurt anyone? It’s gloriously nostalgic, like 1989 in a bottle and there’s plenty of cheesy lines, big hair and extravagant dresses which seemed so cool at the time.

There’s also a banging score which really ramps up the eighties feel, as well as the good old obligatory irrelevant nudity and less than convincing storyline.  There are some truly rubbish martial arts sequences and it seemed very strange to me that  Eric spends all his time training and then kills people using snakes and forklifts rather than his honed skills. 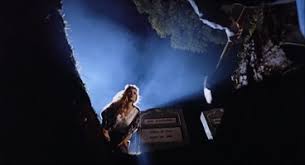 None of this really matters though, it’s fun and action packed and quite silly enough for anybody.

It was inevitable that eventually there would be a slasher version of Phantom of the Opera and it certainly doesn’t disappoint. All in all, this is an awesome package with lots of goodies and a delicious blast from the past, well worth adding to your retro slasher collection.

“The guard with the earring has got to be the guy you saw at Eric’s house that night. Now he’s working here and nobody in mall administration seems to know who he is.”

Phantom of the Mall: Eric’s Revenge is available to buy now on Limited Edition Blu-ray from Arrow Video.

DISC ONE – THE THEATRICAL CUT (BLU-RAY)

• Brand new 2K restoration of the TV Cut with Standard Definition inserts for the footage unique to this version (89 mins)
• Integral Fan Cut combining footage from both the Original Theatrical and TV Cuts for the ultimate Phantom of the Mall experience! (96 mins)