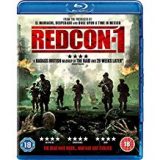 Writer/director, producer Chee Keong Cheung (Bodyguard: A New Beginning) brings us his third film and his first for ten years in this epic Zombie film. A Zombie film with a difference, 1 It is British, 2 The Zombies aren’t just mindless walking, chomping, dead cannibals, they retain memories of their past life. Which makes for some interesting viewing. Bring it on. The search for the mad scientist is on and only eight soldiers can do it.

London Wentworth prison and 600 inmates are rioting, this is all a distraction for James Rowan (Marc Baylis, Strippers vs Werewolves) to escape with the help of his cell-mate Ivan Gavric (Douglas Russell, A Lonely Place to Die). On his flight Rowan is is cornered and he smashes the window of a car and pulls out the woman driver and takes her hostage.

Apparently Rowan is the carrier of a fatal virulent virus and when Jennifer Stanton (Lyndsay Fielding) bites Rowan’s arm, she briefly becomes the

second carrier, until he shoots her dead and he follows her as the police open fire. But the virus is out there and has spread fast infecting millions in the greater London area, which has now been turned into a quarantine zone.

There is a mad scientist in the middle of all the mayhem and Major General Charles Smith (Euan Macnaughton, The Wee Man, Pride and Prejudice and Zombies) charges CAPT Marcus Stanton (Oris Erhuero, A Lousy 10 Grand, The Cursed Ones) and his crew, made up of British and American soldiers, from Rangers to the SAS. 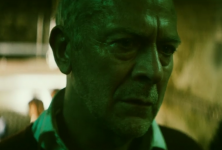 Dickenson, An American Exorcism), LIEUT Rodrigo Gonzalez (Michael Sheehan, Crow) and LIEUT Simon Lau (Akira Koieyama, Rush) and they have 72 hours to find Dr. Julian Raynes (Robert Goodale, Doctor Faustus) the man behind this virus and see if he has a vaccine to cure the zombie hordes before they over run the Quarantine Zone.

Eight men four locations and they are all full of zombies that have memories of their old lives, postmen still are postmen and traffic wardens are still posting tickets, they just prefer their meat raw and preferably still walking nowadays and as time passes they are evolving into an even deadlier foe.

With more claret than a French winery.

You are in for a feast of

Redcon-1 is available on Blu-ray and DVD