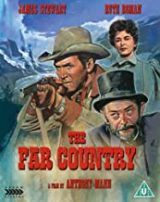 Director Athony Mann (Winchester ’73, Bend of the River, The Man from Laramie, The Heroes of Telemark) an expert in the dramatic and filming James Stewart (My Darling Clementine, Two Rode Together, The Flight of the Phoenix) this being the fourth time they have collaborated together in his gritty western roles and this is one of the best. This is ninety-seven minutes of beautiful cold scenery and colder characters.

Jeff Webster (Stewart) is a hard independent man who drives cattle for profit and now that he has heard about the Klondike gold rush he and his friend Ben Tatum (Walter Brennan, Red River, Rio Bravo) want to get their cattle to Dawson for the best price possible in the hills filled with gold. But first they m

ust get to Skagway, the gateway to Canada. They get their cattle on board a steamer and as they embark Jeff is accused of murdering two people that he had hired to move the cattle. They bump into Rube (Jay C. Flippen, The Wild One, Winchester ’73) a drunk friend of Ben’s  and a mystery woman who helps him evade capture.

She turns out to be Ronda Castle (Ruth Roman, Strangers on a Train, The

Shanghai Story) and she owns the main saloon in Skagway. When Jeff gets his cattle off the steamer, the cattle run through the street and disrupt a hanging which causes the self appointed law man to take a great dislike to Jeff and his cattle and has him arrested, for the murder charges and his flagrant disregard for public saftey.

In jail he meets Renee Vallon (Corinne Calvet, What Price Glory, Peking Express) who is funding her father to go to Vienna to become a stomach doctor. She does this by nudging miners when they weigh in their gold dust, she then spends after hours time sweeping up the sawdust and panning for the gold. Oh and she likes tall men such as Jeff.

The rest is for you to enjoy as Jeff and friends try to head to Dawson and earn the money for their retirement to Utah. 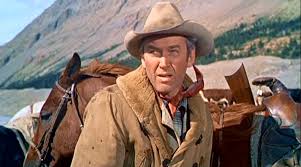 The Far Country is available on Blu-ray