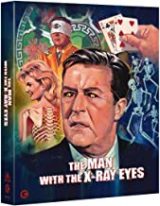 Known for classic horror films such as The Pit and The Pendulum, The Fall of the House of Usher and The Masque of the Red Death, Roger Corman directed and produced this independently made colour science-fiction horror film on a low budget and now Second Sight Films brings us a newly restored version on Blu-ray.

Right from the opening credits, this film wants to put you on edge for what is coming in the next seventy-nine minutes in this cutting edge independent Sci-Fi Horror.

“You’re experimenting on yourself?”

“I’m blind to all but a tenth of the universe.”

“My dear friend, only the gods see everything.”

“My dear doctor. I’m closing in on the gods!” 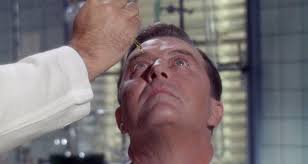 Dr Xavier has developed eye drops that have increased his range of vision, enhancing his depth of field, and he shows one of his experiments to dear

friend Dr. Diane Fairfax (Diana Van der Vlis, The Girl in Black Stockings, The Incident) which involves a monkey, eye drops and coloured cards. He has conditioned the little monkey to light coloured bulbs depending on which card it sees, he runs the experiment with Diane watching closely as the monkey sees the covered white card then the other two cards. This is all too much for the little monkey.

The money could not comprehend what it was seeing, humans can.

James suffers for his science as he gets the reluctant Sam to help him with the drops, but it is all too much for his senses.

All this leads to a review of his research. The news isn’t good and James has

to become a regular doctor and help with a surgery in the morning with Dr Benson (John Hoyt, When Worlds Collide). This is where James’ talents and his stubbornness come into play and all things turn in a different direction.

With his continued use of the eye drops the effects become stronger but erratic and James has to find a way to earn money and use his talents and further his research. 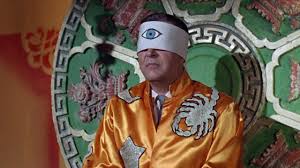 The Man with X-Ray eyes is a game changing point in the Sci-Fi horror genre that would take many years and a lot more money to surpass. A true classic that can now be owned on Blu-ray. A combination of trying to shock along with American modesty taken into consideration. 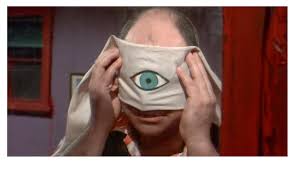