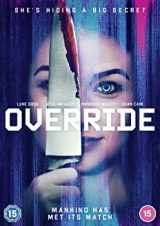 It is All about Love.

Editor, writer and director Richard Colton (Dangerous Game, The Seven) brings us his second foray into tackling both jobs, with a strange revenge story of seven years in the brewing. A man with a  mission and he wants the World to know all about it, and bear witness to it.

It is raining with a weather warning of incoming storms, the roads are slick, and the road is dark as there is a crash of metal on metal and the

sound of a horn blares through the noise of the rain and the leaden night sky. A man is trapped and there is blood as a man appears and cries for help ring out, but he turns and runs away.

The year  is 2040, and it is Good Morning to RIA, (Jess Impiazzi, Retribution, The Tombs) a young woman rises from bed and puts on her dressing gown and heads to put on her makeup and choose today’s attire. Once dressed, she puts

on the kettle and makes a drink and takes it to her sleeping partner. Good morning sleepyhead. Jack (Luke Goss, Paydirt, AWOL 72, Mercenary for Justice) awakes to see his beautiful RIA. Jack dotes on RIA and wants to spend his time with her, he helps her with the chores and enjoys watching her exercise before having a dance on the astroturfing outside their 1950s style house.

RIA is very set in her ways and when they are challenged she stops and considers her answer with a toss of the hair, before carrying on with her routines, like watching her favourite soap on TV before the nine-o-clock watershed. One of RIA’s quirks is she does product advertising at set point during the day, she really must like these products. Before she watches her soap she prepares a little evening treat for Jack, a gift wrapped cigar.

RIA wakes at 07:03 again and sets about her routine, but which makeup will she choose today? She brings in a cup of coffee and wakes up Jack, but he is a

different guy. But she goes through the same routine even though Jack #2 (Amar Adatia, EastEnders (TV Series), Gangsters Gamblers Geezers) is horrible to our RIA, and is in general not a very nice man. No dancing, just abuse.

Next morning and Jack#3 (Sarah French, The Amityville Murders, California Dreaming) and she is a nice woman she treats RIA well, and they have a great time.

Day-in, Day-out we see RIA with lots and lots of Jacks, what is going on?

Well we find out on the Erika Turner (Amber Doig-Thorne, The Seven, Fanged Up) Morning show. With special guest stars Mitchel (Mark Holden, Captain Phillips, Bang Bang You’re Dead) and Robert Stewart (Leon Ockenden, Family Affairs (TV Series), Coronation Street (TV Series) ) the producer and director of A Day With RIA. A show that has run for four years and has had five differently themed seasons.

This where we find out about RIA sympathizers out in the community, and it is people around the globe that decide what she wears and what chores she does each hour, each day. Who is in the right, and who is in the wrong?

What would happen if there was a wayward son with a connection to the Vice President (Dean Cain, The New Adventures of Superman (TV Series), Descent Into Darkness) watching the show and thinking I’d like to spend a day with RIA?

Play Misty for Me meets The Stepford Wives.

Override is available on Digital and DVD