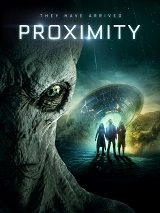 Proximity is a feature film debut for writer and director Eric Demeusy and is reasonable for a first attempt, nicely filmed but with no shortage of issues.

“So, we’ve been making a lot of progress on our Millenium Two project. I don’t wanna brag but it’s kind of like the biggest thing since sliced bread, if sliced bread could actually carry humans to Mars.” 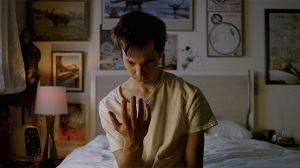 As well as working on the Millenium project, he and fellow worker Beck (Max Cutler – Blood Craft) also have a competition going, sending and locating signals through satellites. One day Isaac intercepts a signal that isn’t from Beck, but thinks no more of it.

Struggling with his mental health, Isaac is recommended by his psychiatrist to start keeping a video diary of his feelings. He takes a hike to clear his head, and as he prepares to head back down a ball of light plummets from the sky. 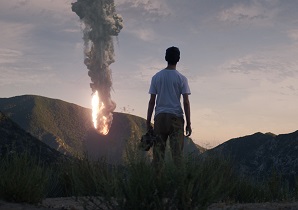 Army types rush to cordon off the scene, but he is already there, so he sneaks a peek at a glowing disc in the sky.

Turning around, he comes face to face with a grey alien, they look each other up and down as he stands frozen. Luckily, he manages to capture footage on his camera. The next thing he knows, he’s lying on the grass in a totally different location. Feeling he has also acquired some new talents, Isaac is convinced that he has been abducted.

He releases the footage online and it immediately goes viral, initially in a positive way, but unlike the X Files, people do not want to believe. This leads him to try and track down fellow abductees, including Sara (Highdee Kuan – This is Us), Carl (Don Scribner – The Guide) and conspiracy theorist Zed (Christian Prentice – Harvard Court) as well as falling foul of the sinister Agent Graves (Shaw Jones – Blue, Criminal Minds).

Proximity gets off to a really good start. Based out of a NASA facility you think ‘well, there may be some solid science here’. What you get is an increasingly far fetched and ridiculous story. 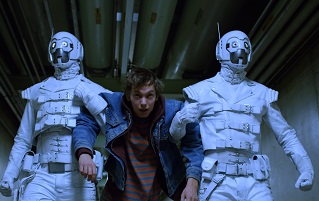 They had me up until the point where they wheeled out the Men In Black followed by Doctor Who-esque white bondage androids with lava for blood, who make Stormtroopers look like master marksmen.

The acting is not bad for a group of relative unknowns working with a stilted script and the filming style is nice, colourful and effective and the special effects good. The main issue for me (aside from the story) is the soundtrack. It doesn’t fit at all, it’s too loud, grating and intrusive and ruins any atmosphere that had been created, this film would be greatly improved by a rescore. I won’t even go into the twist, really?!

I would however still recommend Proximity to fans of the genre, it’s fun enough and films like this are few and far between, ideal for an evening popcorn session, just don’t expect Spielberg.

“Man, the media is going crazy with this, huh? I mean, you’d think after seeing your tape they’d ease off a little.”