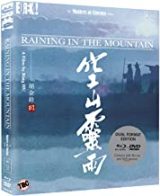 A Wise Man Sees All.

Once again Masters of Cinema bring us another masterpiece from the magnificent story teller King Hu (A Touch of Zen, The Fate of Lee Khan, Legend of the Mountain), having written, directed and edited this tale of greed, desire and redemption this is 100% a King Hu film. #215 in their Dual-Format restoration series, which takes us to 16th Century China, a time when treasures were measured by different criteria.

The opening five minutes are spent watching three people traverse the beautiful landscapes of the Far East. Through glens and forests they walk in all weathers, until they are climbing the mountain to the Three Treasures Temple. The travelers are Esquire Wen (Yueh Sun, Kung Fu Killers, Seven

Foxes, City on Fire), His Concubine (Feng Hsu, The White Butterfly Killer, Assassin, Magnificent 72) and the valet (Ng Ming-Choi) and they are greated by the guardian of the Temple, Brother Hui Ssu (Paul Chun, The Six Directions of Boxing, The Dreaming Man).

ill health and before he departs he is to choose a successor. Because there are three canidates, Wen is there to mediate if there is a rift between the brothers. Along with Wen the other mediator is General Wang (Tien Feng, Fist of Fury, The Flying Tiger, A Better Tomorrow) with his lieutenant Chang Cheng (Hui Lou Chen, The Monk’s Fight, The Deadly Sword).

But these destinguished guests both hide a secret, they both covet one of the

three treasures of the Temple, ‘The Mahayana Sutra’ hand-copied by Tripitaka.

Also lay Buddhist master Wu Wai arrives with his cohort of young female followers to help advise the Abbot in his choice of his successor. The choices are between Brother Hui Wen (Lu Chan) who is supported by Esquire Wen, where as Hui Tong (Shih Jun) is supported by General Wang and there is the younger Hui Ssu (Paul Chun Pui) who is the Abbots helper.

While all this is going on, a guard and a convict travel to the Temple so that the now ex-convict Chiu Ming (Tung Lin, The Iron Bodyguard, The Killer Meteors, Snake and Crane Arts of Shaolin) can become a monk. The Abbot and Wu Wai respect a penitant man even when he says that he was

framed by a corupt offical called Chang Cheng. His first chore of being an initiate is to clean the massive Temple where he sees and hears and remembers everything, giving him a useful insight into the Brothers and visitors alike.

With General Wang using his Lieutenant and Esquire Wen using his Concubine and his valet to find the scroll and with the new Brother Ming in the middle, thing are bound to get interesting in the vast open Temple.

A beatiful film with a great sound track from Ta Chiang Wu (10 Magnificent Killers, A Touch of Zen, Tiger Over Wall).#215 is definitely one to add to your Masters of Cinema and King Hu collection, or a brilliant way to start your collection.

Who will the Abbot choose as his Successor?

Raining in the Mountain is available on Dual-Format.