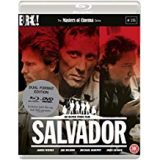 Writer/director Oliver Stone was about to hit the big time with hits such as Platoon, Wall Street, Born on the Fourth of July, The Doors, JFK and Natural Born Killers. Salvador was considered a flop, with its political statements and subject matter. But what a film, about a washed up photo-journalist (James Wood) hated by his peers and those that used to employ him.

At the start of the film you are informed that the events took place between 1980-81 and the names are fictional.

He’s out of work, he’s out of money and with a young baby he and his wife are

behind on their rent, but he can always find enough for the booze and the drugs. This won’t last for long, as his wife leaves and goes back to her Italian family, leaving an annoyed Richard Boyle (James Wood, Videodrome, Scary Movie 2, Once Upon a Time in America) wondering how he can get back in the game and get the Pulitzer Prize he thinks he was robbed of back in the day.

He gets in touch with his long time friend Dr Rock (James Belushi, Trading

Places, Little Shop of Horrors, Red Heat) who is looking for his dog at the local impound, Boyle borrows Rock’s last $200 and Rock finds out that his beloved dog has been put down. Boyle heads home only to find that he has been evicted and his wife has gone back to her parents. 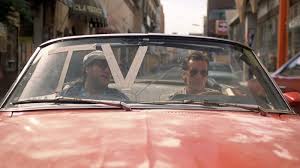 With nowhere to sleep, Boyle convinces Dr Rock that the place to be and pick up work is down in El Salvador, a place Boyle believes will be the next Vietnam as America are sending advisers and trainers to keep communism out of the Americas. When they get there they are soon confronted with the horrors of a war zone as a young student is shot for not having his Cédula (birth certificate) and then his body is tied to a troop carrier that Rock and Boyle are bundled into, which sets Rock off in a fit of hysteria but the arrogant Boyle says it will be OK as he knows Col. Julio Figueroa (Jorge Luke, Clear and Present Danger).

“Is that why you’re here, Colonel? Some kind of post-Vietnam experience like you need a rerun or something? You pour a hundred twenty million bucks into this place, you turn it into a military zone, so what, so you can have chopper parades in the sky?”

Set up with clean clothes and some cash after meeting the Colonel, Boyle sets about trying to find work and he bumps into fellow photo-journalist John Cassady (John Savage, The Deer Hunter, The Thin Red Line, The Godfather: Part III) and convinces him to work together (very disturbing scenes of mass graves).

But what affects Boyle the most is meeting the real love of his life María (Elpidia Carrillo, Predator, Predator 2) who Boyle had a son with the last time he was down this way.

Salvador is a Tour-de-Force in the visuals of a war zone and how it affects those around it, from the military backed by the US and the rebels that don’t even know what communism is, but are just fighting for freedom from the oppression of the death squads. 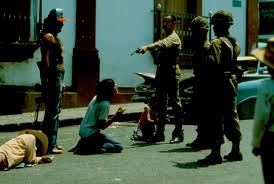 Salvador is available on Dual-Format