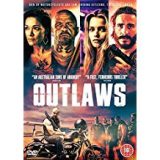 A Shakespearean Tragedy on Two Wheels.

Australian films always seem to come hard and fast at you, none more so than Outlaws. A tale of the Copperheads M.C. and how they have tried to forge a future without their President. First time feature film director Stephen McCallum (Flume: The Infinity Prism Tour (TV Movie)) does a cracking job showing the relationships between the members and the ambitions of individuals vying for the top spot.

A large group of motorcyclists trundle down the black of the roads of Australia, they are all members of Copperheads M.C. and under the guidance of the Paddo (Mark) (Ryan Corr,Wolf Creek 2, Hacksaw Ridge) for the last few years.

He and his partner Katrina (Abbey Lee, Gods of Egypt, Mad Max: Fury Road, The Dark Tower)  have strived to move the gang forward by increasing its numbers and trying to clean the money they earn, thus legitimising the gang. 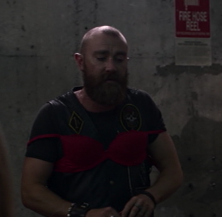 But there is a fly in the ointment, Marks brother Skink (Adam) (Josh McConville, Joe Cinque’s Consolation) who is mentally challenged and makes the big mistake of stealing 2 kilos of heroin from rival gang the Devils lead by Sugar (Aaron Pedersen, Mystery Road, The Fear of Darkness). He isn’t best pleased and has the three kidnapped and beaten but Skink doesn’t have any of the drugs left so Sugar gives Paddo a proposition of laundering the Copperheads dirty money through their bars and Casino’s for a 30% cut, which is agreeable to Mark.

But this has to get to get the approval of the President of the gang Knuck (Matt Nable, Riddick, Incarnate) who is shortly to be released, but at the moment he is enjoying the pleasures of men locked up.

Mark and Knucks wife Hayley (Simone Kessell, San Andreas, The Informers) go to visit Knuck, who tells his Paddo to set up the meeting when he gets out.

But the difference between the President and his Paddo is that Mark wants to make the gang legit and Knuck just wants to fight and the meeting doesn’t go the way Mark or Sugar wants. This is a problem for the both of them.

Knuck hates everything that Mark has done in the last three years, from his merchandising, recruitment and where he is taking his gang.

Mark doesn’t know what to do, challenge Knuck or leave, but Katrina knows how much he is respected by the members and when he is given an ultimatum by Sugar, things are about to get interesting.

An Australian version of Sons of Anarchy (there, I said it) in an hour and a half. A great job by a new talent in the directing department and the twist at the end is just a cherry on the top.

Outlaws is available on DVD